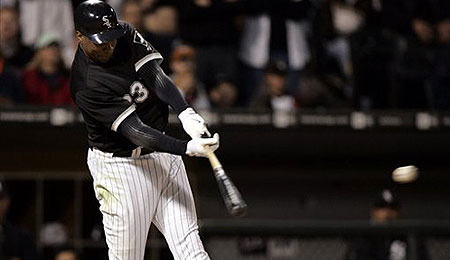 Can Jermaine Dye repeat his success from last season?

I just finished my draft and am not all that content about my team, but know if I make a few moves I could have a strong team.’I just traded Jermaine Dye because I know his value is high and he won’t do as well this season.’I traded Dye and Cole Hamels for Felix Hernandez and picked up Chuck James as a FA. This is my team, please let me know if there are any suggestions you have for it.’

First off, you need to pick up a waiver wire replacement for Figgins. He is out for a while. After that, 1B, 3B, SS, and the OF are all pretty strong. But, you will lack in the steals department.

As for pitching, the SPs are fine, but I think the pen may haunt you. I’d pick up a Seth McClung or Dan Wheeler as insurance if I were you.

To be honest, I like to have one backup at each position just in case my starter goes down. C and 2B would be where I looked tonight. One for a new starter and the other for depth. You only need four OFs. I may deal off Markakis for a 2B or top CL. I love the guy, but your OF is strong without him.

By James Morris
This entry was posted on Thursday, April 5th, 2007 at 10:58 pm and is filed under BASEBALL, Dear RotoRob, James Morris. You can follow any responses to this entry through the RSS 2.0 feed. You can leave a response, or trackback from your own site.