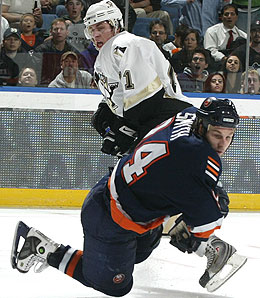 If Evgeni Malkin, background, isn’t the Rookie of the Year, there should be an inquest.

With one week left, let’s do a little prognosticating for some of the final statistics:

Calder Trophy (I know it’s not based on stats, but come on)

There’s just a handful of games left, but Dany Heatley still has a shot at 50 goals. Facing Martin Brodeur won’t help things, but a Rick DiPietro-less Islanders squad and a hapless Bruins team just might.

Speaking of DiPietro, the does he/doesn’t he saga has concluded and with it, so too has a big chunk of the Islanders hopes. DiPietro does appear to have post-concussion symptoms and that means that journeyman Mike Dunham takes over the reins for the final week of play. Remember when everything seemed so rosy on Long Island after the Ryan Smyth acquisition?

Just in time for the playoff push, Cristobal Huet could return Saturday night against the Buffalo Sabres. If he’s healthy and his hamstring feels good, expect Huet to push the rest of the way.

The highly-touted Jack Johnson debuted for the LA Kings. Johnson’s first game was solid but unspectacular — almost 19 minutes of ice time, one shot on goal, and a -1. However, the key for Johnson is getting him game experience. Look for him to be on the fantasy radar come next season.

Staying in LA, does anyone outside of Southern California know that Michael Cammalleri is close to a point per game? Keep him on your sleeper list for next year’s draft.

It looks like any hopes of Tim Connolly seeing any ice time this season are all but dashed. Fantasy owners that kept him on injured reserve, we salute your patience.

Martin Biron signed a nice fat contract to stay in Philadelphia. With dollars committed to Biron, the future is uncertain for Antero Niittymaki, though you never know just how the goaltending situation in Philly will turn out.

Who’s the best young defenseman in the NHL? The talk of the hockey world is now Pittsburgh’s Ryan Whitney with 56 points in 78 games. As the entire Penguins team matures, look for Whitney’s point total to go up even further.

Here’s your playoff-critical games of the week:

For the teams jockeying out west, watch out for Stars-Red Wings (Friday), Stars-Predators (Saturday) and Sharks-Ducks (Wednesday).

The Colorado Avalanche still have a slim hope of making the playoffs. They’ll have to take the game against Calgary (Tuesday) and hope there’s still a chance when they play the Flames again for the season finale.

There’s still a logjam at the bottom of the Eastern Conference. Keep an eye on Lightning-Hurricanes (Friday, Tuesday), Rangers-Islanders (Tuesday) and Canadiens-Rangers (Thursday).

Will the Stanley Cup Champions miss out on the playoffs? The ‘Canes will try to run the table against Tampa (twice) and Florida.

By Mike Chen
This entry was posted on Friday, March 30th, 2007 at 6:47 pm and is filed under HOCKEY, Ice Chips, Mike Chen. You can follow any responses to this entry through the RSS 2.0 feed. You can leave a response, or trackback from your own site.