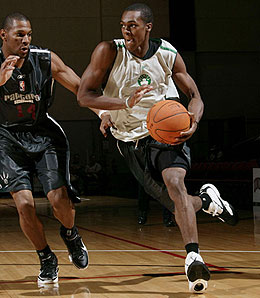 With Rajon Rondo, right, sitting on the waiver wire, should you be hanging on to your injured superstars?

I have them both on my roster, but don’t think I can keep them and make the playoffs. Do you think either is likely to come back this season? Are they worth hanging on to? Rajon Rondo is out there, and James Posey, Gerald Green, Damon Stoudamire and Ike Diogu are all on the waiver wire.

The latest on Johnson suggests he will be on crutches at least until April, and while he’s itching to get back out there, it sounds like he’s done for the year.

As for Wade, he’s still rehabbing his left shoulder, but the team still hasn’t set a target date for his return. Pat Riley says Flash is making progress and is stepping up his drills, but the team doesn’t expect to know when he’ll be ready for a while.

Basically, I don’t see Johnson playing again this season and would just drop him now. Wade has a very good shot of not playing in time to help a fantasy team. Even if he makes it back for the playoffs, or a short burst before, he will be hurt, not 100 percent, and will take up a roster spot to only play a handful of games in the end. Honestly, I had Wade and dropped him a few weeks ago. Johnson would have been cut if I had him.

I would cut my losses with both and sort the players based on totals for the last month, then rank and not O-Rank, and then get the best C and SG available. I’d then bench Anthony Johnson and start playing Chris Webber. You’ll be fine with Allen Iverson and Chris Paul at the point. But, I have a feeling you are lacking in the rebounds and blocks department.

By James Morris
This entry was posted on Monday, March 26th, 2007 at 9:38 pm and is filed under BASKETBALL, Dear RotoRob, James Morris. You can follow any responses to this entry through the RSS 2.0 feed. You can skip to the end and leave a response. Pinging is currently not allowed.