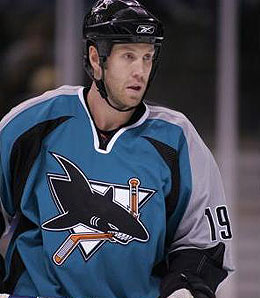 Joe Thornton is on his way to a new career high in points.

With just two weeks left in the season, new line combinations are starting to shake out. In San Jose, Bill Guerin’s finally found a home, but it’s not with Joe Thornton. Instead, Guerin’s skating with Patrick Marleau and Mark Bell. The combination has also worked out for Bell, who’s playing his best hockey of the year.

Peter Forsberg returns to the lineup, but with Martin Erat out of the lineup, Forsberg’s got a new winger with Alexander Radulov. The skilled rookie has everything he needs for success with Forsberg’s great passing vision and linemate Paul Kariya’s speed and shot.

There’s not too much to do now in Columbus except look towards next season. Ken Hitchcock’s taking a page out of Scotty Bowman’s playbook by moving Sergei Fedorov to D for what might be the rest of the season. The reasoning? Hitchcock needs someone who can make a great outlet pass while being fast enough and responsible enough to cover the zone. Playing defense isn’t new for Fedorov, and it’ll be interesting to see if there’s a change in his power play time and points.

In Minnesota, Niklas Backstrom has quietly taken over the starting role, and with a .924 save percentage — good enough for third in the league — backs up Jacque Lemaire’s decision.

Will fantasy games start awarding points for shootout goals? For future reference, Erik Christensen is leading the league in shootout goals. Some of the lesser-known names include Mikko “I’m not Saku” Koivu and Petteri “I have three goals this season” Nummelin.

In Detroit, Robert Lang’s found a good partner in Kyle Calder. Lang’s helped turn around Calder’s miserable season into a bright spot, as Calder’s been a point-per-game since his run in Detroit started.

In Boston, Marc Savard is trying to make fans feel better about not having Joe Thornton. After a bad start, Savard’s numbers are actually pretty close to Thornton’s. Savard has 21-70-91 in 70 games while Thornton has 19-75-94 in 72 games. Of course, the ideal situation for Bruins fans is if they had kept Thornton and signed Savard.

The possibility of a 1-2 finish with Alexander Ovechkin and Sidney Crosby is pretty much dashed now thanks to Ovechkin’s slump. Ovechkin’s at least trying, though; in his past five games, he’s got 28 shots on goal. Unfortunately, only three of those have gone in.

Speaking of Crosby, it seems like the chase for 100 was causing the young star to tighten up a bit (probably because it was chronicled here!). Since breaking the century mark, Crosby’s responded with six points in three games.

A lot of things have gone wrong in Colorado this year, but here are three things that Avs fans can hang their hats on: 1. Joe Sakic’s impressive point totals show that he’s not slowing down at all; 2. Rookie Paul Statsny is almost at a point-per-game, meaning that next season the Avs should see even more out of him; 3. Peter Budaj’s stats and games-played have put him in the legitimate steady (and sometimes spectacular) No. 1 starter category. Now if only the Avs could dump Jose Theodore.

By Mike Chen
This entry was posted on Saturday, March 17th, 2007 at 11:51 pm and is filed under HOCKEY, Ice Chips, Mike Chen. You can follow any responses to this entry through the RSS 2.0 feed. You can skip to the end and leave a response. Pinging is currently not allowed.