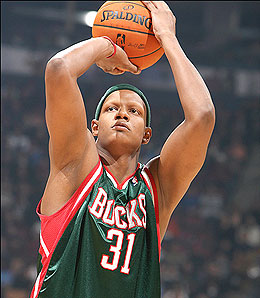 The T.J. Ford for Charlie V deal hasn’t exactly worked out for the Bucks.

I had such high hopes for the Bucks this year, believing that another trip back to the postseason and a winning record were both in the offing for 2006-07. Instead, the Bucks have dealt with injuries and shoddy D. And now all that’s left to look forward to is a drum filled with Ping Pong balls. In this week’s Position Battles, we check in the Milwaukee Bucks.

Stromile Swift is teasing us again; Fabricio Oberto might get another look in San Antonio; and Rajon Rondo has survived the cut in Beantown.

So once you’re done scratching your head over the idea that the same kind of person who would buy a Dell would want Linux on their PC, surf on over to this week’s Position Battles, where you’ll find a delightful amount of Linux-less fantasy basketball notes.

By RotoRob
This entry was posted on Wednesday, March 14th, 2007 at 4:32 pm and is filed under BASKETBALL, Position Battles, RotoRob. You can follow any responses to this entry through the RSS 2.0 feed. You can leave a response, or trackback from your own site.