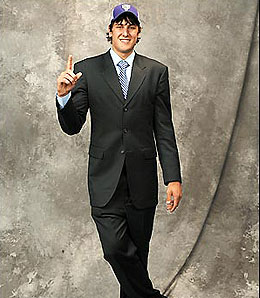 Should you deal Andrew Bogut for Raja Bell?

I just gave up Andrew Bogut for Raja Bell. I am No. 1 in boards and am 120 boards away from the guy in second place.

Well, you’ve already done the deal so I guess the only real question is if you like the deal. Bogut gets you boards and Bell gets you 3s. So, the only answer is if you are far behind in 3s and far ahead in boards, then it is a good deal. However, the season is closer to being over than it is to starting. So, you might have been just as well off scrapping the 3s and focusing on the other categories instead.

If you find yourself really far behind in a category and it is near the deadline, just scrap that one and focus on the rest. I don’t know what you are behind in, but Bell is a 3-point guy only. They score about the same points, but Bogut gets you boards and Bell gets you 3s. That’s it.

Love you columns.’They are very insightful and helpful to my fantasy teams.

Should I drop Lamar Odom? I know people ask it a gazillion times, but really…like it has been repeatedly said that he suffered an injury similar to Dwyane Wade but not quite as serious as his and that if he can rehab, he’ll be back in three and a half weeks, so I’m optimistic about that…here’s my team…should I really drop Odom or do I have enough backup to miss him for three weeks (assuming he’s going to return and his numbers across the board are very valuable)… .

This is a Yahoo! Roto league.’I have exactly 150 games played left for the remaining five and a half weeks.’I’m in eighth place in FG% with .453 and the next guy ahead of me has a FG% of .454…do you think I could reach him?’I’m about 150 rebounds back but I think I can make it up to get to first place because the guy in first place has only 100 games left for him.’I have a slim lead in assists and looks like I won’t be leading it anymore with West out (Editorial note: West is now back.)’Who should I pick up?’The available FAs I have my eyes on are…Jose Calderon, Brendan Haywood, Erick Dampier, Eddie Jones, Brian Cook, Ruben Patterson and Steve Blake.’What should I do? Drop Odom?’

Thanks for you advice. Keep up the good work! Have a good one.

Thanks for buttering us up. Feel free to head on over to the donation button after getting your advice! 🙂

Besides having a cool name, I must say that this one gave me some trouble.

First of all you need to look at the up to the second status on Odom. Odom will wait two to three weeks before deciding a course of action for his torn labrum. That doesn’t mean he will be back in three…that means he will wait three to see exactly what he will do then. The Lakers are hoping to get him back for the playoffs which does nothing for your Yahoo! league…I know…I am in like eight myself. So, I go ahead and cut my losses with Odom now and move on. With the open spot, I get the hot pick of the week and keep them rotating in and out as I see them heating up and cooling off.

[Editorial note: Since James’ reply to Prashant, it has been announced that Odom returned to practice and is expecting to play Thursday night.]

Now, the rest. Do I think you can catch up in FG%, boards and assists?

Start by going to the FA screen and filtering by the last month’s total for stats. Don’t look at last week or the whole season…last month’s total is a good indicator of his total performance for a 30-day period, which about what we have left to work with.

Calderon works out to a ranking of 62, and he is currently on a few of my rosters. Here is how the others work out:

Now, based on what you said and what I see from these guys, I cut Odom and Aldridge. I then grab Calderon and Patterson. Jones in Miami is going to be erratic with the stats. Calderon will help with the assists while West is down and he is a nice pick-up really. Aldridge is getting the playing time (26-28 MPG), but his games are more empty than full stats-wise. Outside of his game on March 1, he has a lot of single-digit scoring nights while adding four or five boards and a block or two. Patterson gets you more Yahoo! numbers than Aldridge does. Don’t fall in love with these guys…sort them out by Yahoo! rankings and you will do better in the long run.

You’ve got a good crop of starters. Use Odom’s spot for the hot pick of the week and start with Calderon and Patterson while West is down. Once West comes back, look at moving Calderon for the hot boards guy to make sure you catch up. Anderson Varejao from Cleveland is a good place to start.

By James Morris
This entry was posted on Wednesday, March 14th, 2007 at 3:06 pm and is filed under BASKETBALL, Dear RotoRob, James Morris. You can follow any responses to this entry through the RSS 2.0 feed. You can skip to the end and leave a response. Pinging is currently not allowed.