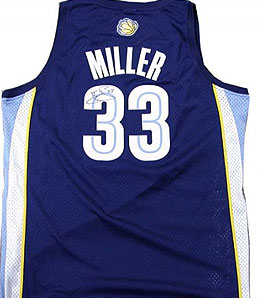 The way Mike Miller’s shots are dropping this year, the value of his autographed jersey must be soaring.

The Raptors will get their second look at Memphis this season at the ACC tonight, with both teams trying to end losing skids, but with the Grizzlies owning bragging rights over their former fellow Canadian team with eight straight wins. In this week’s Position Battles, we take a closer look at a Memphis team that seems destined to utter Greg Oden’s name in June.

In Seattle, Luke Ridnour’s neck injury has allowed Earl Watson another crack at the PG job for the Sonics and Chris Wilcox is in one of his slumps.

In search of child prodigy drummers? We’ve got that. Want fantasy basketball news? We’ve got you covered there too, in Position Battles.

By RotoRob
This entry was posted on Wednesday, March 7th, 2007 at 3:51 pm and is filed under BASKETBALL, Position Battles, RotoRob. You can follow any responses to this entry through the RSS 2.0 feed. You can leave a response, or trackback from your own site.