Spikes Up: The 25th Oriole 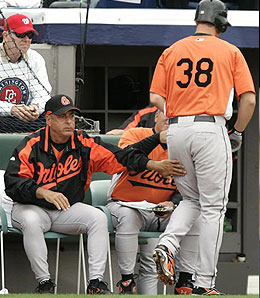 Baltimore will have some interesting battles this spring with its first base/left field/designated hitter slots and its starting rotation, but let’s focus today on another issue facing the O’s, namely, who will be the last player on the 25-man roster.

The early favourite is Freddie Bynum, who offers the flexibility of being able to play all three outfield spots plus second base. Acquired from the Cubs in December after hitting four homers in 71 games last season, Bynum, 26, has impressed Manager Sam Perlozzo with his infield defense in the early going.

Brandon Fahey, also 26, was a surprise last season when he became somewhat of a super sub for the Orioles, starting games at second, short, third, left and right, while batting .235. While I admire his taste in ballplayers ‘ Will ‘The Thrill’ Clark was Fahey’s boyhood idol ‘ I don’t like his chances of following in Clark’s footsteps. In fact, I’m not sure the beanpole (6’2’, 160-pound) Fahey will be able to duplicate the success he enjoyed last year.

J.R. House could be an intriguing sleeper in AL-only leagues if he lands the 25th man gig. He could see time at both corner infield spots, but also has a chance to qualify at catcher, and given his offensive potential that would make him worthy of consideration. If Baltimore is seeking offense, House would be the way to go here.

Jon Knott is another player known for his bat, especially the long ball. He’s just mashed incessantly at Triple-A the past three years (83 homers), but all it’s earned him is a lousy 17 at-bats for the Padres in 2004 and 2006. Knott could handle a corner outfielder job and help at first base. I have always been curious what he’d do if he got a legitimate chance in the bigs.

Former Twin prospect Terry Tiffee is also in the mix and the change of scenery may do wonders for him as he had clearly fallen off the map in Minnesota. But he’s limited to a corner infielder spot and has never really done any one thing well enough to merit serious consideration.

Finally, Adam Stern has a chance for the job as well, but the fact that he can only play the outfield hurts his prospects and a current injury may leave him behind the others, so this Canadian, a former Cornhusker, is looking like a longshot.

By RotoRob
This entry was posted on Monday, March 5th, 2007 at 9:12 am and is filed under BASEBALL, RotoRob, Spikes Up. You can follow any responses to this entry through the RSS 2.0 feed. You can skip to the end and leave a response. Pinging is currently not allowed.