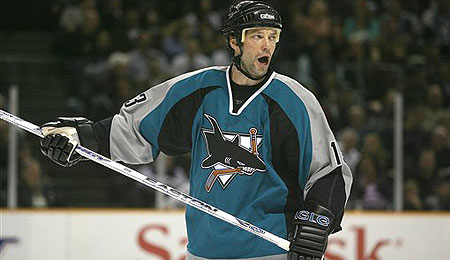 New Shark Bill Guerin should get plenty of goals playing alongside Joe Thornton and Jonathan Cheechoo.

The St. Louis Blues shipped off their big guns to two teams struggling to return to form. In San Jose, Bill Guerin was slotted immediately with Joe Thornton and Jonathan Cheechoo. In Atlanta, Keith Tkachuk was on the ice with Ilya Kovalchuk. Both power forwards are expected to create havoc in front of goal creases; the issue is whether or not they will gel with their linemates. Guerin has a greater chance for success simply because the Sharks have much more depth, giving coach Ron Wilson some flexibility with his lineup.

Staying in Atlanta, the acquisition of Alexei Zhitnik has stabilized the blueline. The biggest recipient of this is Kari Lehtonen, who needed some defensive help while he tried to regain some consistency.

The Todd Bertuzzi saga has moved on to Detroit. Word is that at best, Bertuzzi is seven-to-10 days away from being in the lineup. However, chances are it will take him another two weeks or so to get his conditioning back and get used to his new team. Bottom line, if he’s on your fantasy IR, you may get two-to-three good weeks out of him if he finds his form.

The good news out of Long Island is that Ryan Smyth is already contributing, and the better news is that the Islanders should get even tougher once Alexei Yashin returns to the lineup. Ted Nolan’s crew should power through an upwardly mobile playoff push. The fallout from Garth Snow’s deadline deals is that the team has depth that it hasn’t seen in years and the forwards should benefit as a whole.

Jason Williams should get plenty of ice time in Chicago. As the Hawks are really thin up front, look for coach Denis Savard to experiment with the shifty Williams on the same line with the shiftier Martin Havlat. There’s nowhere to go but up.

A quieter move was made by St. Louis as it snuck Brad Boyes out of Boston for Dennis Wideman. Boyes was having a subpar season in a pretty awful situation, but he may approach the remaining few weeks of the season as a bit of new life. He won’t have a lot of teammates to pass to, but at least he can learn from a true professional with a similar style in Doug Weight.

Martin Biron assumes the role of No. 1 goalie in Philadelphia. Sure, he’ll get starts — but will he get any wins to make him worth playing? Without Peter Forsberg, the Flyers’ record has been pretty atrocious so don’t bet on it.

The Sabres added to their depth and addressed their injury woes by acquiring Dainius Zubrus. However, once the team gets healthy, Zubrus will get shoved down in the depth chart. Ride him out for a bit, then don’t be afraid to put him on your bench.

If your league likes PIMs, just imagine how many times Gary Roberts and Georges Laraque will go to bat for Sidney Crosby, Jordan Staal and Evgeni Malkin.

Speaking of Staal, the kid potted yet another shorthanded goal the other night. Staal also deserves a Cy Young award for going 26-7 — as in 26 goals and just seven assists.

The Penguins picked up some goaltending depth with Nolan Schaefer. However, don’t expect Marc-Andre Fleury’s job to be challenged anytime soon. Instead, Schaefer will provide some depth as a solid backup.

By Mike Chen
This entry was posted on Friday, March 2nd, 2007 at 9:31 pm and is filed under HOCKEY, Ice Chips, Mike Chen. You can follow any responses to this entry through the RSS 2.0 feed. You can skip to the end and leave a response. Pinging is currently not allowed.