Who Closes for the Reds? 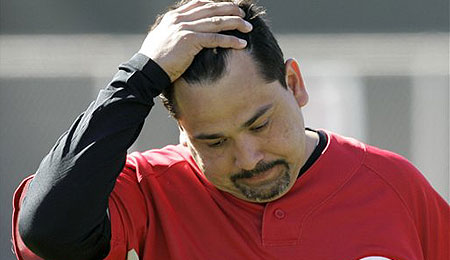 After Tommy John surgery, Everyday Eddie won’t be Anyday Eddie until at least midseason, leaving the Reds’ closing duties up for grabs.

It looks as if the Reds plan to employ the dreaded closer-by-committee approach while waiting for Eddie Guardado to recover from Tommy John surgery.

The early line suggests David Weathers and Mike Stanton will both garner saves, each taking turns depending on who’s due up for the other team. If lefties are the predominant threat, Stanton gets the ball; should mostly righties be taking hacks, Weathers will be summoned. Great. Nothing like a job-share to completely negate everyone’s fantasy value.

To make matters worse for those of you drafting early, Todd Coffey and Bill Bray could figure into this mix if either of them steps up with a dominating spring. But that’s something that likely won’t emerge for a few weeks.

If you’re looking for a projection, according to RotoRob Cincinnati Reds correspondent Shawn Weaver, Weathers is the early leader.

By RotoRob
This entry was posted on Sunday, February 25th, 2007 at 11:09 pm and is filed under BASEBALL, RotoRob, Team report. You can follow any responses to this entry through the RSS 2.0 feed. You can leave a response, or trackback from your own site.