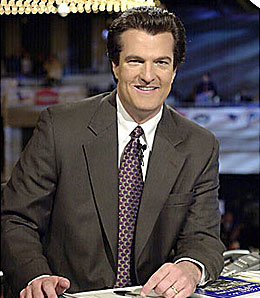 While Andy can’t quite compete with Mel Kiper’s ‘do, he’s quite capable of assessing the NFL Draft from a fantasy perspective.

With the 2007 NFL draft a mere, umm, two months away, I thought it would be cool to take a fantasy football glance at what could happen and what we – the fantasy football world – would like to see happen. I preface this column by disclaiming that I am not Mel Kiper. Lord knows my hair gives that away immediately. It also means that I am not any sort of NFL insider. I won’t try to act as if I know what teams will do come April 28. This is a pretty good resource for that kind of information. And everyone knows about these guys.

Anyway, on to part one of How April 28 Can Change the Fantasy Football World. (Insert evil laugh.) Oh, and I’ll start with the top picks because I’m still not ready to talk about the Colts.

Expert’s Whispers – JaMarcus Russell seems to be the top guess as to who will be the newest Raider come draft time. The LSU quarterback would probably need more time to grow, but let’s be honest, the Raiders can afford to wait. Joe Thomas (OT, Wisconsin) and Calvin Johnson (WR, Georgia Tech) are also on the radar.

Fantasy Owner’s Dream – Russell is the hope, at least in my opinion, for a couple reasons. First of all, the Raiders’ offense was a disaster last season. Offenses that have essentially nothing should start with a franchise quarterback to rebuild. It might take longer for wide outs to flourish in the NFL than quarterbacks, but a great quarterback with two or three average wide outs can still get the job done. Finally, Georgia Tech’s Johnson is the most imposing wide out to enter the NFL since, well, probably Roy Williams. If he ends up with a half-decent offense around him, then maybe he could have an immediate impact. Oakland isn’t the place for that to happen.

Expert’s Whispers – Is there anything scarier for Lions’ fans and fantasy owners alike than the prospect of Johnson (WR, Georgia Tech) still on the board for Matt Millen with the second pick? Think about the primal fear that will be shooting all around Detroit. It’s absolutely frightening. Anyway, the people in the know think Thomas (OT, Wisconsin) will be the pick.

Fantasy Owner’s Dream – Thomas, Russell (QB, LSU), or Johnson seem to be the guys for this pick, but the uncertainty swirling around Kevin Jones’ Lis Franc injury makes taking a running back here an intriguing idea to fantasy owners. Jones did have some success last year and a guy like Adrian Peterson (RB, Oklahoma) or even Marshawn Lynch (RB, California) have skill sets superior to Jones’.

Expert’s Whispers – The third pick will go to either Tampa or Cleveland after a coin flip for it, but each of these team’s needs are so different that it probably won’t effect who goes where. Apparently, Johnson (WR, Georgia Tech) should take his 4.3 second 40 time and 6’5″ frame to sunny Florida.

Fantasy Owner’s Dream – Johnson works here. Frankly, if Jon Gruden was able to get two straight 1,000-yard seasons from Joey Galloway, he should finagle 1,600 yards or so per year for Johnson. Right? Anyway, it’s one of the few reasonable places where he could have an immediate impact.

Expert’s Whispers – It’s all about Peterson (RB, Oklahoma) here. The Reuben Droughns era came to a crashing halt last season, and Peterson would add an extremely athletic guy to an offense with some legitimate skill players.

Fantasy Owner’s Dream – Of course, Charlie Frye hasn’t exactly reminded anyone of…umm…Bernie Kosar? Or, err…Brian Sipe? (Go ahead, you try to name a great Browns quarterback.) In any event, Brady Quinn (QB, Notre Dame) and Russell (QB, LSU) would get consideration if they are available. But we in the fantasy football world wouldn’t be too upset if Peterson landed with the Browns.

Expert’s Whispers – This is where consensus begins to fade. The Cardinals have a defense that can’t get off the field and an offensive line that is as bad as any in the NFL. The experts seem to think they will address the defensive side of the ball in the first round. Gaines Adams (DE, Clemson), Jamaal Anderson (DE, Arkansas), and Reggie Nelson (FS, Florida) are the names to remember.

Fantasy Owner’s Dream – Those are all nice and fine players. But this is fantasy football we’re talking about. Who cares about defense? I implore the Cardinals to take offensive lineman. Is there anyone ‘worth’ this high pick after Thomas? Maybe not, but oh well. You reap what you sow, and the Cardinals have sewn together the worst offensive line in the league. They should take lineman with every pick. Levi Brown (OT, Penn State) works for me.

Expert’s Whispers – With one pick in the first four rounds of the 2007 draft, the Redskins probably won’t be able to improve their team too much. The experts have Adams (DE, Clemson) and Anderson (DE, Arkansas) as the guys who can bolster Washington’s terrible 2006 pass rush.

Fantasy Owner’s Dream – Pass rush? Borrring. Wouldn’t a stud wide out be much more exciting? Ted Ginn Jr. (WR, Ohio State) could make something of an impact and give Santana Moss a much needed attention detractor on the other side. Quinn (QB, Notre Dame) is also intriguing.

Expert’s Whispers – According to Internet rumors, the Vikings should have a Larry Fitzgerald–Randy Moss wide out duo next season. If that (gasp!) doesn’t happen, then Ginn Jr. (WR, Ohio State) might just have to do.

Fantasy Owner’s Dream – The Buckeye do-everything player would be a fine addition to the Vikings, but are we really going to be relegated to watching Brad Johnson for another season? Quinn (QB, Notre Dame) is a better pick to me, just because it’s kind of painful to see Johnson throwing passes.

Expert’s Whispers – One of the saddest stories in NFL history might be that of David Carr. The Texans first round pick in 2002 has never been given an offensive line to work with. Now the consensus seems to be Quinn (QB, Notre Dame) will be the pick if he’s available. It’s a cruel, cruel world.

Fantasy Owner’s Dream I would just like to see Carr get some protection. Brown (OT, Penn State) makes sense if he’s available. Barring that, Ginn Jr. (WR, Ohio State) would pair up with Andre Johnson to make a heck of a wide out duo.

Stay tuned to the next three parts of the fantasy football guide to the 2007 draft, only here on Rotorob.com! (Commercial Break.)

By Andy Goldstein
This entry was posted on Sunday, February 18th, 2007 at 12:28 pm and is filed under Andy Goldstein, Draft report, FOOTBALL, Gridiron Goldstein. You can follow any responses to this entry through the RSS 2.0 feed. You can skip to the end and leave a response. Pinging is currently not allowed.