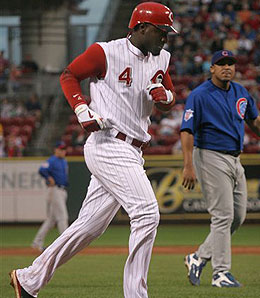 When choosing a second sacker, beware of Brandon Phillips’ weak second half.

Dear RotoRob,
‘
I’m in a keeper fantasy league. I must trade for a second baseman. Which one should I’acquire between these: Brandon Phillips, Ian Kinsler, Orlando Hudson, Dan Uggla, Marcus Giles, Felipe Lopez?
‘
Give your thoughts on each one please. It will give me better idea to pick up the right player.

Please, I need your help.

I think Giles is your best bet and he will probably come cheaper than normal after a down season in 2006. My second choice, and one that will likely come even more inexpensively would be Kinsler. I’m really high on his prospects.

Of the others, Uggla had a great rookie season, but I don’t see much upside there. He’s seems like a safe play for a couple of years, however.

Phillips finally delivered on his promise. Can he do it again? I’m worried about that .243 BA with much worse strike zone judgment after the break. I’ll reserve judgment until he has another big year.

Hudson is intriguing because of his burgeoning power. I like the fact that he finally learned to hit with some pop without sacrificing his BA. What I’d really love to see from the O-Dog, however, is some real stolen base ability. The dude is fast. Use it, man!

If speed is your thing, then Lopez is your man. I think his BA will continue to slip and those homers he had in Cincy aren’t coming back, but he should bag 30+ steals again, and that’s always valuable.

Hey, do you have like a big board for the upcoming draft? What are some guys I should look out for’some sleepers? And what strategy do you think is good for a H2H league…pitcher or batter heavy?…could you just give me some pointers on the draft please?

I’m still working on my big board, but I did recently release my catcher rankings recently and hope to be posting some other positions shortly.

As for sleepers, here’s a few names off the top of my head to look out for: Kelly Johnson (will likely get 2B job in ATL), Gerald Laird (starting catcher in TEX and ready to explode), Josh Barfield (getting out of Petco should translate into more pop), Howie Kendrick (you’ll never get him cheap again), Rich Hill (loved what he showed me last year), Chuck James (ready to become a major force), Rickie Weeks (missed a lot of time last year, but proved he was a fantastic lead-off man; I expect huge numbers this year); also keep an eye on his double-play partner J.J. Hardy (won’t challenge for a Silver Slugger or anything, but could supply a bit of pop and make a solid back-up infielder).

As for H2H, it’s not my specialty, but I’d suggest:

By RotoRob
This entry was posted on Sunday, February 18th, 2007 at 11:12 pm and is filed under BASEBALL, Dear RotoRob, RotoRob. You can follow any responses to this entry through the RSS 2.0 feed. You can leave a response, or trackback from your own site.