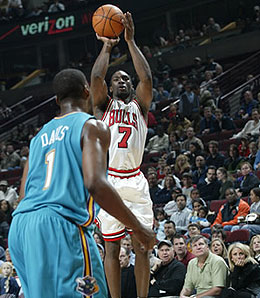 Give up Danny Granger for Ben Gordon in a keeper league? No bull…that’s a smart move.

I want to make sure I’m sane. I just proposed to give up Joe Johnson for Rashard Lewis and it got accepted. I’m nervous about Lewis’ hand, but his percentages, 3s and low TOs are so tempting; and there’s always Joe’s turf toe to worry about. I’m currently winning my Roto league, so I’m not sure if I should have messed with my success, although I pulled off trading for Chris Bosh when he was hurt back a month or two ago for Ben Gordon and Danny Granger.

Who should I drop to get a PG since I will need one because White Chocolate and Brevin are out for now? I plan on plugging in Knight when he’s healthy for the long run unless he sucks.

I’d say Jack for sure, but you’re the “expert.”

If you think I’m an ‘expert,’ perhaps we should question your sanity.

Having said that, the deal has its risks as you outline, but being in first place, I suppose you can afford to take some risks. Overall, I prefer Lewis, but should we be worried about his shooting touch when he comes back wearing a protective glove? Johnson is lights out since J-Smooth came back to help take the heat off, but again, I like Lewis better.

As for who to drop, I think it’s safe to say Nachbar and Carroll each appear at the end of their runs. Take your pick there based on what you need.

Yup, Jack’s your best bet. But beware that Sergio Rodriguez will be back soon, and he’s hot on Jack’s heels, so I have doubts about the long-term job safety. Safer pick: Watson.

I was offered a very delicious deal and need your advice. Someone offered me Lamar Odom and Luol Deng for Josh Childress and Chauncey Billups.

When looking at just the names it looks good but I looked at the stats and I am losing more stats than gaining in a Roto league.

I am losing in FT%, Assists, Steals, Turnovers and 3PM.

In FG% it is pretty even so basically I am getting back rebounds, points and blocks.

I need your opinion.

Yup’upon reviewing this deal, it isn’t nearly as tasty as it sounds. I wouldn’t make this unless I was totally desperate for rebounds. It’s going to hurt too much, especially in FT shooting, without any major gains (other than RBs).

Take a pass on this one.

How is it going? Daryl here with some trade advice needs. It’s a keeper league with 20-man rosters. I have been offered Ben Gordon for Danny Granger. My small guys are Stephon Marbury, Jameer Nelson, Delonte West, Luke Ridnour and Randy Foye. And my PG/SG are Joe Johnson, Monta Ellis, Iggy, Luol Deng and Trevor Ariza. I was wondering if I need to make the trade to help my PG/SG category. I really like Granger and his across the board numbers, and I always hear big for small is not a good trade. I do have the No. 1 pick in our rookie draft this year so plan on taking Kevin Durant or Greg Oden and really shoring up my bigs category.

Do you have any thoughts on this?

I like your core of guards so I’m not absolutely sure you need Gordon. He would be a great addition, mind you, and definitely help you this year. From a long-term perspective, I love the steady growth I’m seeing from Gordon and I think he has room to grow to become a better team player. Granger is also improving tremendously, but I am concerned about his long-term path as long as he remains a Pacer, because of the manner in which their system tends to thwart offense to an extent.

I say make the deal and use your No. 1 pick to grab a big man.

What’s up? Haven’t talk to you in a while, and hope everything is well.

Hey, buddy. Need help from you once again.

What do you think of trading Gerald Wallace for Dwight Howard?’Wallace has been on tear lately since coming back from his shoulder injury, but health will always be my concern.’I don’t know when and how the ‘Crash’ will land next time. Do you think it’s a good trade?’I am a bit hesitant since Wallace has been doing so well for my team.’

I really like Mo Williams, so I can afford trading Deron William for another SG.’

Give me some good advice here please.

Everything is groovy here, thanks man.

Oh man’that’s a tough deal. Yes, Wallace is just sick lately, but Howard is looking pretty damn amazing too. I think you may have to go for it. The gains in rebounding, FG percentage and blocks is just too sweet to pass up. Not to mention you rid yourself of a prime injury risk and sell high in doing so.

As for Deron Williams for Bell: no way! This is another one of those ‘I need a 3-point shooter’ deals, isn’t it? Man, tank the category before giving up a stud like Williams. Bell is a great player, and one of the best 3-point shooters out there, but you’re losing this deal pretty badly.

Now, the second offer is far more attractive. If you can get Miller for those two, I think you need to swing that deal. Unless, of course, you’re worried about Nash’s health, that is.

By RotoRob
This entry was posted on Monday, February 12th, 2007 at 4:25 pm and is filed under BASKETBALL, Dear RotoRob, RotoRob. You can follow any responses to this entry through the RSS 2.0 feed. You can skip to the end and leave a response. Pinging is currently not allowed.