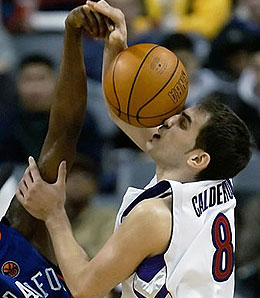 Since T.J. Ford got hurt, Jose Calderon has proved there’s nothing he can’t do, and yes, that includes seal tricks.

Well, dog gam (sorry, Ron Artest). It’s been forever since I did a good old fashioned game report. And with the fantastic buzz the Raps are generating these days, what better a time to check in on them than when they went head-to-head against one of their Eastern Conference rivals?

Suffice to say that Toronto withstood a game, but shorthanded Orlando squad 113-103 to win its season-best fourth straight game.

As someone who’s watched this team closely from Day One, it’s safe to say it’s playing its best ball in five years.

And what made last night so special was that Dwight Howard, Orlando’s brilliant young man-beast, went off for a career night offensively with 32 points. How many times in the past could the Raps possibly expect to pull out a W under those circumstances?

Fortunately, the Raps had their own All-Star to answer back. And answer Chris Bosh did, to the tune of 41 points, also a career best. He wasn’t about to be outdone by his U.S. national teammate.

So the winning streak continues, making it nine of last 11 games in which the Raptors have emerged victorious. Can you feel it yet? Go ahead. Say it. P….pl…..playoffs. There. That wasn’t so hard, was it?

With 26 wins in 49 games now, Toronto remains in charge of the Titantic Division, three and a half games ahead of the Nets, who managed to keep pace last night by barely holding off the Hawks.

After winning three straight twice over the past couple of weeks, Toronto finally got over the hump for its first four-spot of the year. I guess we better enjoy this one for now with the Lakers and Pistons on tap this weekend.

Still, with the LA game at the ACC, don’t bet against the Raps. At 10 games over .500 at home, they need not fear anyone in their own house these days. It will be good acid test to finish this three-game homestand before a brief, but tough road trip.

Time for some in-game observations:

By RotoRob
Tags: Toronto Raptors
This entry was posted on Thursday, February 8th, 2007 at 7:06 pm and is filed under BASKETBALL, Game report, RotoRob. You can follow any responses to this entry through the RSS 2.0 feed. Both comments and pings are currently closed.