Position Battles: The Kings and their Castle 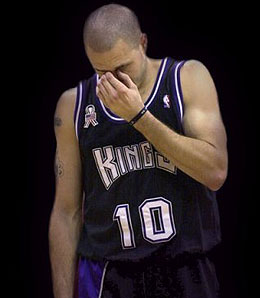 It’s been a season of frustration for Mike Bibby and the Kings.

The Sacramento Kings last missed the postseason in 1997-98, but that run looks in grave danger this season, as this undersized team has consistently been beaten on the boards and has had a hell of time winning away from home. We check in on the Kings’ fortunes in this week’s Position Battles.

Mickael Gelabale is a tremendous athlete, but his grip on the SF job in Seattle looks tenuous; Brent Barry is now starting over Manu Ginobili for the Spurs; and Malik Allen can’t seem to find his way into the Bulls’ lineup consistently.

We’ve got all this and a heap of other fantasy basketball tidbits to chomp on in this week’s Position Battles.

By RotoRob
This entry was posted on Wednesday, January 31st, 2007 at 3:40 pm and is filed under BASKETBALL, Position Battles, RotoRob. You can follow any responses to this entry through the RSS 2.0 feed. You can leave a response, or trackback from your own site.