The Bold and the Blue-tiful 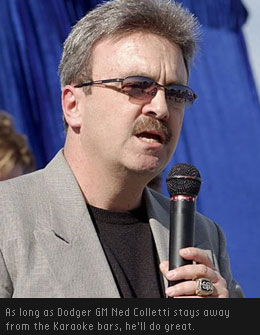 It’s impossible not to be impressed with the job Ned Colletti has done in Los Angeles. In less than 13 months since taking over as the general manager of the Dodgers, he’s turned a team that won just 71 games in 2005 into a playoff team that accumulated almost 90 victories last year.

But this man is not one to rest on his laurels, obviously, as he continues to add pieces this offseason in an attempt to bolster the Dodgers for a run at the NL West title and perhaps more.

Colletti is nothing if not gutsy, especially when compared to the other GM in town, the Angels’ Bill Stoneman. Sure, the Halos got Gary Matthews, Jr., but what happened to the corner infielder they were seeking at last week’s Winter Meetings? Adam LaRoche, Chad Tracy and Todd Helton were all in the Angels’ crosshairs, yet the team couldn’t bag their man.

So yes, if the Dodgers fail to take the next step in 2007 and get back over the 90-win hump, Colletti’s moves will appear to be ineffectual, but at the very least you’ve got to give him kudos for his efforts.

Better yet, the man has a plan. These aren’t random signings. There’s a clear pattern here of adding veterans players who have been on winning clubs. Colletti wants players who bring with them a pedigree of past performance that commands instant respect. Gonzalez has a World Series ring from 2001; Schmidt was a big part of the Giants’ NL Championship in 2002.

It’s a formula that can be risky (see Nomar’s second half, dramatic home runs notwithstanding) but can also work out amazingly well (as it did in the case of Maddux, who was not only solid himself, but the influence he had on Derek Lowe was immeasurable).

Signing free-agent Gonzalez is not exactly as big a splash as dealing for Manny Ramirez (as the Dodgers were rumoured to be trying to do) would have been. But even with Gonzo’s power being long gone (especially when he takes aim at the walls of Dodger Stadium), you’ve got to figure this is a far safer move than bringing in Manny would be.

The addition of Gonzalez also ensures that Matt Kemp (if he isn’t dealt) is ticketed for Triple-A in 2007. I absolutely love this kid long term and just pray he doesn’t get lost in the shuffle as the Dodgers keep adding vets. But given the club’s willingless to integrate rookies into their team, it’s doubtful that would happen.

Re-signing Garciaparra is a move I’m not thrilled with. James Loney has proven he’s ready to hit major league pitching, has an excellent glove and is far more durable than Nomar will be. Unless the Dodgers are planning to parlay Loney into another asset, I don’t like any move that will block this kid. Of course, given the fragility of Garciaparra, Loney could still prove very useful in 2007.

The additions of Schmidt and Wolf, however, solidify a rotation that also features Brad Penny, Lowe and Chad Billingsley. Penny, however, is rumoured to be on the block. LA needs a power bat, and he could be the bait. Could Penny be part of package to entice Toronto to part with Vernon Wells?

If Penny is dealt, the Dodgers may have turn to Brett Tomko, Mark Hendrickson (ugh) or Hong-Chih Kuo as their fifth starter. Eric Stults is another possibility.

J.D. Drew is gone, and he’s taken his productive bat with him, so Ethier will shift over the right field with Gonzalez handling left.

Colletti has again been one of the most active GMs so far this offseason, but he’s not done yet. It wouldn’t shock me at all if he’s able to reach into his bag of tricks at least one more time and pull a legitimate 30-homer man out.

Fans may not always agree with his moves, but you can’t help but have respect for the fact that he’s willing to take risks to remake his team.

By RotoRob
This entry was posted on Monday, December 11th, 2006 at 2:46 pm and is filed under BASEBALL, RotoRob, Team report. You can follow any responses to this entry through the RSS 2.0 feed. You can skip to the end and leave a response. Pinging is currently not allowed.