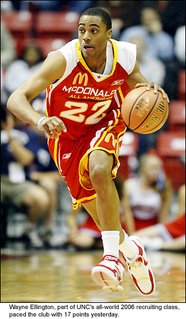 The Tar Heels apparently have their mojo back when it comes to beating the Wildcats.’

UNC was 16-6 all-time against UK when the two storied schools turned their series into an annual affair back in 2000-01, but when the Wildcats were victorious in the first four games, it didn’t seem like such a brilliant idea anymore.

However, the Heels have pushed back since, tacking on yesterday’s win to last year’s 83-79 triumph in Lexington to make it three straight for the boys in powder blue. UNC’s 19-10 overall record against Kentucky makes it one of just two schools to have played the Wildcats at least 10 times and have a winning record against them. The other? St. Louis.

Yesterday’s win should help the sixth-ranked Tar Heels move into the Top Five, coming on the heels of the Heels’ huge 98-89 win over top-ranked Ohio State on Wednesday.

The unranked Wildcats, meanwhile, heading in hot after beating Charleston 77-61 on Tuesday, have now dropped all three games against ranked opponents this season.

By RotoRob
This entry was posted on Sunday, December 3rd, 2006 at 11:10 am and is filed under BASKETBALL, On Campus, RotoRob. You can follow any responses to this entry through the RSS 2.0 feed. You can leave a response, or trackback from your own site.