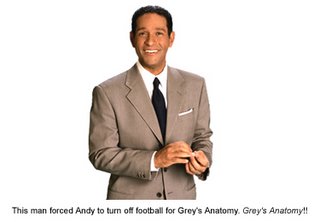 Baltimore at Cincinnati – Last week, Bryant Gumbel and Cris Collinsworth put on one of the absolute worst broadcasts in NFL history. Luckily, about 10 people actually have the NFL network, so there weren’t many witnesses to the horror. Unfortunately, I was one of the few. I only say this because we have five more weeks of the NFL regular season, and people need to make the crucial decision between watching the Thursday night games or watching Grey’s Anatomy. It’s definitely McSteamy for me.

As for the game, Steve McNair is a sneaky start while Jamal Lewis has become a good flex option. Mark Clayton is a very, very deep sleeper. On the Bengals’ side, you can start the usual suspects. Carson Palmer, Rudi Johnson, Chad Johnson and T.J. Houshmandzadeh all get the obvious go sign. Chris Henry might even get a touchdown, but I wouldn’t rely on him.

Arizona at St. Louis – The Cardinals’ offense (sans Edgerrin James) came to life last week. Matt Leinart had his best game as a pro while both Anquan Boldin and Larry Fitzgerald played up to their top 10 potential. Both wide outs are weekly starts, and Leinart might even qualify as a sneaky one this week. Unfortunately, Edge is lost and gone forever. At least for this season. Dreadfully sorry.

Marc Bulger hasn’t passed for more than 250 yards since Week Nine. Ever since Orlando Pace went down with an injury, the Rams’ offense has been anemic. It’s taken a huge toll on Tory Holt and Isaac Bruce. All should be decent starts against a porous Arizona defense, but if they struggle at all, you might have to consider benching them during fantasy playoff time.

Atlanta at Washington – Despite all the press about how awful a quarterback Mike Vick is, the scrambling enigma remains a great fantasy force. In fact, he is a top five fantasy quarterback. Deal with it. Ahem. Start him this week, but leave Warrick Dunn on the bench. Dunn has clearly hit the wall and is no longer a fantasy factor. And for the Redskins…umm…I pass.

Detroit at New England – Sadly, the Jon Kitna era might be dwindling to a close. I don’t consider him a very good option through the fantasy playoffs. Still, it was a nice run while it lasted. The good news for Detroit is that Kevin Jones looks like he will back this weekend. The Patriots have a top run defense, but because Jones has been so good out of the backfield, his dual abilities make him a start.

Tom Brady is having the most impressive regular season of his career. Yardage wise, he has struggled somewhat, but considering the wide outs he is being forced to throw to, his numbers have been absolutely remarkable. That’s a roundabout way of saying you should start him this weekend. He’ll put up the statistics. Other than Ben Watson, the only other Patriot to consider is Laurence Maroney. The rookie is slowly becoming the clear cut number one back.

Indianapolis at Tennessee – Peyton Manning and the passing game get the press for the Colts, but Joseph Addai was the real story last week. He scored four times and got twice as many carries as Dominic Rhodes. It’s safe to use Addai until further notice. Other than that, don’t bench Marvin Harrison or anything. He complained this week about his lack of touches, so expect Manning to go back to him this week.

I hold here some late breaking news: Vince Young is not a bad quarterback. I know this is hard to fathom, especially for a certain someone over at ESPN, but it’s the truth. And get this: He’s a weak fantasy start this weekend. Plus, you know the Titans will be playing catch up all day. Even Travis Henry is a legitimate start, thanks to the Colts’ pitiful run defense.

Kansas City at Cleveland – Larry Johnson is on pace for 410 carries this season. That would tie the NFL single-season record, now held by Jamal Anderson. Of course, Anderson only had one season with more than 60 carries through the rest of his career. If you own Johnson in a dynasty league, I’d be very worried. Anyway, that doesn’t change his value this season. He’s clearly the second best fantasy producer. Other than Johnson, stay away from the Chiefs. The passing offense is just not good.

Minnesota at Chicago – All I need to say is Chester Taylor and thanks for playing, Vikings. The Bears, meanwhile, have some issues. Rex Grossman is the Jekyll and Hyde of the NFL. No one really knows which one will show up each week, and that’s not a good recipe for fantasy football playoff time. Other than Muhsin Muhammad and Bernard Berrian (both weak third or flex options), leave your Bears in their cave this week.

N.Y. Jets at Green Bay – Isn’t it nice that the Jets might be playing for more than just a high draft pick? (They mess those up often, anyway.) But I digress. Laveranues Coles and Jerricho Cotchery are both fantasy starts, but the running back by committee is still in place. While Leon Washington probably has the most talent, his lack of carries means that he is an afterthought.

The Packers went to the frozen tundra of Seattle last week and proceeded to play as if Green Bay was 60 degrees throughout the entire winter. No matter, there are fantasy factors to be found here. Ahman Green got a touchdown last week and is having a decent season. Keep him active unless you have two significantly better options. Donald Driver even got back on track last week thanks to his long touchdown catch. Hopefully it’s not cold or anything on Sunday.

By Andy Goldstein
Tags: Baltimore Ravens
This entry was posted on Thursday, November 30th, 2006 at 7:12 pm and is filed under Andy Goldstein, FOOTBALL, Gridiron Goldstein. You can follow any responses to this entry through the RSS 2.0 feed. Both comments and pings are currently closed.