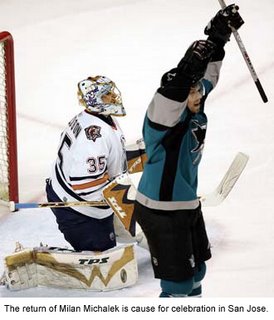 For the Sharks, Milan Michalek is back and Jonathan Cheechoo is set to return this weekend. Who gets bumped from the lines? Rookie Joe Pavelski has put in his share of points in the few games he’s played and Mark Bell’s already been dropped to the third line. Look for Ron Wilson to experiment with a third line of Bell/Marcel Goc/Cheechoo while keeping Michalek/Joe Thornton/Mike Grier intact for now.

Wade Redden’s out again, but this time, it’s not his oft-troubled groin injury. Instead of crotch-area pains, Redden’s got the old standby “upper-body injury” which could actually mean anything from an ingrown toenail to a fractured skull.

Geoff Sanderson has been one of the few bright spots on a dismal Philadelphia team, so it’s too bad that the speedy veteran is out with groin problems.

Ken Hitchcock’s in and the Blue Jackets are playing a little sharper under his tenure even though the results aren’t there. Rick Nash still hasn’t put up points, but it looks like Hitchcock has re-energized veterans Sergei Fedorov and Anson Carter. How long that lasts is wholly dependent on the character of those two individuals. At this stage, a Fedorov resurgence seems unlikely, though he should still be able to rebound from crappiness to mediocrity at least.

For what it’s worth, Mike Modano just got engaged to someone a decade younger than him from Dancing With The Stars. Apparently, she must have thought the show’s title was Marrying With The Dallas Stars.

He’s not getting a ton of press behind the Ducks’ two Norris candidates, but Jean-Sebastian Giguere is proving all the critics wrong with fantastic play. All of the naysayers who said that Ilya Bryzgalov would take over the No. 1 goalie position, now is an appropriate time to apologize to Giggy.

It didn’t take Sidney Crosby long to get back in the swing of things. In Sid’s first game back, he put up two points. His buddy Evgeni Malkin’s been nursing a hurt shoulder, but shouldn’t miss any playing time.

In the desert, Steve Reinprecht and Mike Comrie are practicing. Will two second-line forwards give Wayne Gretzky what he needs to succeed? My guess is no, but someone has to score eventually in Phoenix, right? Keeping on that train of thought, though, Ladislav Nagy’s actually been pretty hot lately.

It’s the end of the road for one John Leclair. His fourth-line ice time and paltry stats mean that he can’t even contribute on a rebuilding Penguins’ team. Don’t expect anyone to pick Leclair off the waiver wire; if he can’t score when Malkin, Crosby and Sergei Gonchar run the power play, it ain’t gonna happen anywhere else. For more on the Leclair waving and a retrospective on the Legion of Doom, check out my blog.

Who’s hot in Ottawa? Not beleaguered captain Daniel Alfredsson, but a pair of grinders. Peter Schaeffer and Mike Fischer both have nine points in the past seven games.

Who would have thought that Alexei Yashin would have ever been the heart of a team? Since the Islanders’ captain went down, they’ve gone on a mini-slump. It’s up to Miro Satan and others to pick up the slack.

Your top-five shot getters so far this season: Alex Ovechkin, Olli Jokinen, Marian Hossa, Ilya Kovalchuk and Brendan Shanahan. Four of the five are European and from the Southeast Division — that probably doesn’t mean anything, but it’s still a statistical oddity.

Jordan Staal only has seven goals for the Pens, however, three of those are shorthanded — enough to give him the league lead in shorties.

By Mike Chen
This entry was posted on Friday, December 1st, 2006 at 2:06 pm and is filed under HOCKEY, Ice Chips, Mike Chen. You can follow any responses to this entry through the RSS 2.0 feed. You can skip to the end and leave a response. Pinging is currently not allowed.