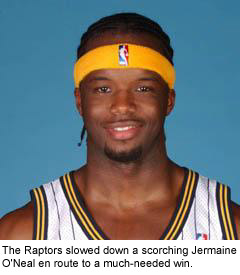 Just as the Pacers have started rolling, winning three of their last four (including a huge win over the Cavs after trailing by 16) to move over .500, they had to embark on their longest road trip (six games) of the season. And the road has not been kind to Indiana. It had lost four straight away from Conseco Fieldhouse before pulling into Toronto for an afternoon clash today against the Raptors.

Of course, playing agains the Raptors — struggling along at 3-9 heading in — doesn’t exactly intimidate anyone. On the plus side, before their win last night, the Bulls were also 3-9, and they are supposed to be good.

Well, the Raptors did their darndest to try, but even they couldn’t throw away a 27-point lead, hanging on to beat Indy 92-83, sparked by a very promising defensive effort.

Stopping a super hot Jermaine O’Neal was going to be a key for this game for the Raptors. Coming off a season-high 29 points (on 8-for-15 shooting) and four blocks on Friday, O’Neal arrived in town riding a streak of four straight games with at least 20 points. He had even pitched in with eight assists in the past two games. Like I said, scorching.

Toronto did a solid job slowing down Indy’s power forward, holding him to 15 points on 5-of-12 shooting. O’Neal still pitched in with 11 rebounds, three assists and a steal, but he was unable to stop the Pacers’ road woes, now stretched to five straight losses.

Another concern for the Raptors was point guard Jamaal Tinsley, averaging over 17 PPG in the past five thanks to back-to-back 19-point games. The always injury-prone Tinsley (knock on wood, healthy so far this season) managed 15 points on 6-of-11 shooting, but he had seven turnovers against just four assists, so he wasn’t exactly a positive contributor.

Even back-up guard Sarunas Jasikevicius was a big factor on Friday, pouring in 15 off the bench. This afternoon, however, as he is wont to do, he disappared (0-for-6, one point in 24 minutes).

Toronto, meanwhile, needed this win badly after a tough four-point loss in Atlanta on Friday (in which the Raps somehow got robbed of two key points by a scoring error late in the game), its seventh setback in the past eight. The Raps needed some home cooking to stop the bleeding, and that’s what they got, snapping a two-game skid against the Pacers. They are now 4-2 at the ACC. Just bottle that and get it through customs, please.

It was very encouraging that the Raps managed to win without a big effort from T.J. Ford. After just missing a triple double Friday (25 points, 12 assists, eight rebounds), Ford was very quiet this afternoon, managing just six points, six assists and four boards.

Chris Bosh, meanwhile, rebounded somewhat after Friday’s season-low 11-point game. He managed 17 today — better, but still not up to his standards. He’s really struggling from the field since Wednesday’s hard fall to the court, and he says he’s okay, but that brace on his knee suggests otherwise.

Morris Peterson, who had his NBA ironman streak of 371 straight games snapped on Wednesday, missed a third straight game with a partial tear in his left elbow. Toronto could really use some contribution off the bench from its seven-year veteran, yet strangely, it’s won two of three since he went down.

By RotoRob
Tags: Toronto Raptors
This entry was posted on Sunday, November 26th, 2006 at 4:08 pm and is filed under BASKETBALL, Courtside, RotoRob. You can follow any responses to this entry through the RSS 2.0 feed. Both comments and pings are currently closed.