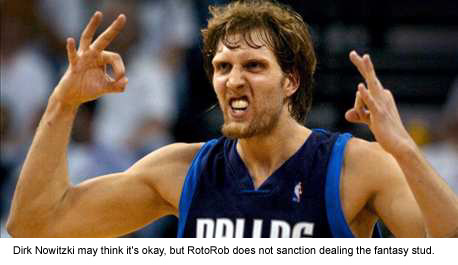 We’re back with another batch of letters from readers who either are looking for help with their fantasy teams or perhaps just want to share some observations. Let’s get to it.

First off this week, Larry E. approached me with a fascinating conspiracy theory in response to my article about Daisuke Matsuzaka. At the time, we were still waiting to hear who would win the bid.

You made the process sound so simple, so let me throw a monkey-wrench into this simplicity.

Here is my scenario.

Boston knows the Yankees want this guy. Boston wants to prevent that (ego? competitive edge?) but Boston cannot afford or doesn’t want to pay the post plus what Scott Boras will demand in salary. What is to stop them from:

1. Bidding an amount guaranteeing them the right to negotiate (the amount is irrelevant as you will see);

2. Making sure in the negotiations that their offer will not be accepted (five years, $25M, surely not what Boras is looking for).

Result: Boras rejects and cries foul Tough Sh.. Scott. Matsuzaka goes back to Japan. The Lions return the post. Boston wins (Matsuzaka is not a Yankee).

Unless there are other rules not explained in your column, this tactic is entirely legal.

Wow, what a great conspiracy theory. I suppose that could happen, but doesn’t that seem like an incredible waste of effort considering they could just sign him themselves? This isn’t one of those claim a player who’s on waivers to keep him away from your competitor situations.

I wonder if something like that actually happens whether the Bosox would come under scrutiny for negotiating in bad faith.

Thanks for the note’very interesting.

To which Larry replied:

First step has already happened. Buster Olney reported that Bosox have the winning bid at between $38 million and $45 million [RotoRob says: we now know that Boston did win it with a $51.1 M bid!].

Now we’ll see what happens. My guess is that MLB would sanction Boston in someway (refusing to allow it to bid on the next X-number of Japanese players, etc.). Clearly the Sox have abided by the letter, but not the spirit of the law.

Same thing happened this week in college football. With the clock now starting when the kicker hits the balls instead of on receipt by the receiving team, Wisconsin intentionally went offside on two consecutive kickoffs at the end of the first half. It killed the last 23 seconds of the first half doing that. Complied with the letter, not the spirit of the law.

We’ll watch over the next month to see how this plays out and see if Larry was on the mark with his theory.
***
Brian wrote in to ask about a possible big deal in his fantasy basketball league.

Hey! I’m a big fan of your columns on Rotoworld! I have a quick question for you. In a roto league, do you think I should trade Dirk Nowitzki and Kevin Martin for Kevin Garnett and (who do you think out of these — Josh Howard, Bobby Simmons, Andrew Bynum, Darko Milicic, Channing Frye or Monta Ellis?) I can replace Martin with Ben Gordon or Andre Iguodala. I also have Leandro Barbosa, Steve Nash and Mike James. So I figure I’m still solid at my guard positions even if I give up Martin. It seems to me that Martin and Dirk just score, while Garnett will contribute a lot more with rebounds and blocks. What do you think?

Thanks for nice note.

I would hardly say that Dirk just scores. Nine rebounds and over three assists per game is plenty more! There’s a reason he goes in the top five of any draft. How about that shooting this year? The dude’s over 50 per cent!

Martin has improved his rebounds and assists this year and is way up in steals (almost two per game). Plus he’s super hot right now. Everybody wants Martin and if you dangle him, you’ll get a nice return.

Look, we all know KG is a fantasy god, but in terms of pure talent and numbers, the second player you’re getting is not bringing enough to the table.

My suggestion is to deal Martin for Emeka Okafor, who will come way cheaper than Garnett, but who’s numbers are not that much below what KG provides (and check out the blocks!). That way you maintain your stud in Nowitzki, but still help yourself in areas you need it.

Thanks for the advice. I took Martin out of the deal and ended up giving Dirk and Gordon and Danny Granger, for Garnett, Ellis and Milicic. What do you think of that?

I’m glad you kept Martin; like I said ‘ shop him around’you’ll get some people falling over themselves for him. I just finished watching him do a number on the Raps.

As for Dirk, I was actually kind of hoping you’d hang on to him. He’s just a scoring machine. I hate to give up Gordon, cuz I think he’s got breakout written all over him this year, although he’s been quite inconsistent so far, and now I hear he may be on the real trade market. I also am a big fan of Granger; his scoring ability is really starting to shine through, but he seems to have slipped in the FT department so far.

Garnett’s definitely going to be his usually studly self for you so that’s a fantastic addition obviously. Ironically, there’s talk he may be moved to Chicago in the Gordon deal. Real life imitating fantasy, eh? I like the minutes Ellis is getting right now, but coach Don Nelson is all over the place with his lineups, so I’m worried about any Warriors’ value right now. He’ll get you some points, and help you in assists to an extent, but like I said, it’s a risk. Speaking of risks, Milicic is also a biggie. He’s starting to get things going though, and Battie has a slim hold on the job, so Darko should be starting very soon.

Hope the deal works out!
***
Next up, we heard from Seth who was looking for an evaluation:

Who looks better to you in an eight-category H2H league — Steve Francis or J-Will?

Thanks again for the help.

It’s close because of Francis’s solid shooting this year and his improved outside game. But Williams provides more offense (especially from outside) without hurting you in the percentage cats. My biggest worry about J-Will right now is the fact he’s so injury prone (of course, I say this as Francis is out [RotoRob says: Francis is now back, but looks limited], but he doesn’t have the history Williams does; just keep them both away from Bruce Bowen).

When healthy, Williams is going to get more PT than Francis and that will be the determining factor for the counting stats. Let’s face it, Stevie is nobody’s idea of a Franchise player since he left the Magic. Williams has started practicing now, so he’ll be back soon. There was talk he’d return last night, but that didn’t happen.

I prefer J-Will in this one.

Good luck.
***
We then heard from Andy, who had some issues with his player’s PT.

So, Reggie Evans. Give this guy 20 minutes and he’ll give you 10 rebounds. Is there any word on if he’s going to be getting playing time? I understand he’s terrible offensively, but he can sure clean up the trash. Thanks for you input.

I hear ya, man. Denver has a serious problem on its hands. Joe Smith is also riding the pine, although he’s starting to get some minutes as the Nuggets look to showcase him. Even with K-Mart going down, there aren’t enough minutes to go around in this frontcourt. Nene’s wasn’t playing much and now he’s hurt, but as he works his way back after last season, his minutes will go up. What about Linas Kleiza? He has potential, but is near the end of the bench.

The Nuggets need to make a deal to clear the logjam. One of the big men has to be dealt to a team that needs size (Boston? the Clippers?) Until then, however, Evans remains an inconsistent play, although he’s been looking pretty good this week.

Cheers.
***
Finally, we heard from Macman who also had a gripe about his boy’s PT.

Good afternoon. I just wanted to know if you knew what is up with Zydrunas Ilgauskas. He isn’t even getting 20 minutes a game. I understand the Cavs playing with a smaller, quicker line up, but this is a guy who averaged almost 17 PPG last year and that I drafted as my No. 1 centre for this year. I’m in a 12-team league where the center position is pretty thin, but his trade value has hit rock bottom. Best I can get for him is Stephen Jackson. Will Ilguaskas ever get back to last year’s form and start logging some minutes or is he the bust of the draft so far?

Cleveland is following the trend that many teams are employing this year and playing a lot of small ball. Zydrunas has really struggled to adapt to this new offense. He’s a half court player who doesn’t like to play in the post, even though in theory, he should be a tremendous player in the paint. I think that’s why he’s shooting so poorly, as he’s not exactly suited to a catch and shoot offensive game. He isn’t getting any easy baskets in this new system, that involves a lot of movements and options. It hasn’t helped that he dislocated his finger on Saturday, but that’s a pretty minor injury.

Another factor is that Larry Hughes is healthy, so that’s meant less touches for Z. Also, is age catching up to him?

Ilgauskas is actually doing better on the boards, but I can understand why you’re frustrated. There are plenty of big men around the league who seem ill-suited to the running game these days.

Don’t deal him out of desperation. I think you’re better off holding on to him until his value increases. He should still see big minutes against the true centres in the league.

There’s not a lot of centres out there now. Maybe someone dumped Joel Przybilla when he went down. He might be worth stashing on your bench until he gets back.

By RotoRob
Tags: Daisuke Matsuzaka
This entry was posted on Wednesday, November 15th, 2006 at 1:21 pm and is filed under Dear RotoRob, RotoRob. You can follow any responses to this entry through the RSS 2.0 feed. Both comments and pings are currently closed.