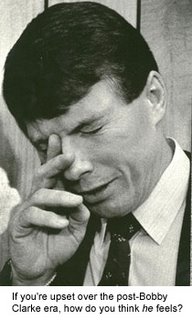 So how do you like the post-Bobby Clarke era so far?

It’s official — after last night’s 4-1 loss in Toronto, the Flyers are off to their worst start ever.

Sure, there were some positives to take from this one. Philly actually had some jump, managing 41 shots on goal. But the Flyers still can’t put the damn puck in the net. In fact, only Columbus has fewer than the Flyers’ total of 29 goals in 14 games.

Some of my posts have been pretty damn long of late (which seems to have alarmed some), plus I have some deadlines today, so let’s try to keep things relatively quick today.

By RotoRob
This entry was posted on Tuesday, November 7th, 2006 at 1:29 pm and is filed under Rink Notes, RotoRob. You can follow any responses to this entry through the RSS 2.0 feed. You can leave a response, or trackback from your own site.