From the Sidelines: Bengals-Falcons Report 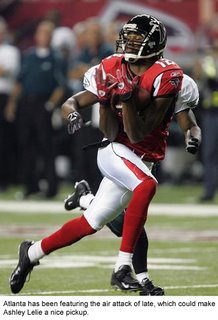 How about some NFL observations from RotoRob? Note that Gridiron Goldstein is the NFL authority around these parts, while I tend to stick to other sports. But hey, I’ve gotta be versatile, right?

With that in mind, here’s what I took from yesterday’s exciting Bengals-Falcons game, won by Atlanta 29-27.

As Atlanta shifts its attack to more of an air-based offense, Ashley Lelie is quickly becoming a more integral part of the team’s plan. In the last two weeks, Lelie has seven receptions for 113 yards, almost matching his previous five weeks’ worth of numbers.

Despite missing the first two games of the year, Bengals’ receiver T.J. Houshmandzadeh is on pace for 956 yards, which would top his total from 2005. Better yet, with Chad Johnson struggling, relatively, Houshmandzadeh has become a primary red zone target, on pace to break his career best with nine TDs. Is Johnson or he the team’s top target? It’s a good problem for the Bengals to have.

Speaking of Johnson, he really needs to drink more water or something. Not once, but twice he has to go to the locker room for an IV fluid replenishment. Uh, yeah. After the second time he headed back in to the locker room, the RotoWidow turned to me and said ‘he must have been drinking a lot last night.’ To which I laughed, considering her very state on Friday night, and said ‘I guess you know the signs, eh?’ The RotoWidow confirmed that, yes, ‘unfortunately,’ she does recognize that pain.

Warrick Dunn came into the game as the NFL’s fourth-leading rusher, but you wouldn’t know it the last two weeks. His YPC was 2.7 against the Steelers and just 2.9 yesterday. As long as the Falcons keep succeeding in the air, the run won’t need to be as featured, unless the game is a blowout.

Carson Palmer is clearly coming on the last couple of weeks. He started conservatively, hitting 5-of-7 passes in the first quarter, but for only got 37 yards. All told, he enjoyed his finest game of the season with a 24-for-36 performance for 266 yards, two TDs and no picks, yet he was definitely outplayed by Michael Vick. Who saw that coming?

Vick, however, is getting a ton of protection from the O-line and he’s capitalizing big time. He also has his best day of the year, going 20-for-28 for 291 yards, with three TDs and no interceptions. And don’t worry, Vick was still running wild, gaining 55 yards on nine carries.

The Falcons absolutely dominated in the second half, and it was truly impressive how they took over the game despite not getting much from their ground game. Atlanta wound up scoring on four of its last seven possessions. Vick is maturing along with the Falcon air game and this team suddenly looks like it can put points on the board against anyone. The Falcons are now tied for first in the NFC South thanks to the Ravens bitch-slapping New Orleans yesterday.

That victory by Baltimore, meanwhile, combined with the Bengals’ loss, has the Ravens suddenly alone in first place in the AFC North.

By RotoRob
This entry was posted on Monday, October 30th, 2006 at 4:07 pm and is filed under From the Sidelines, RotoRob. You can follow any responses to this entry through the RSS 2.0 feed. You can leave a response, or trackback from your own site.