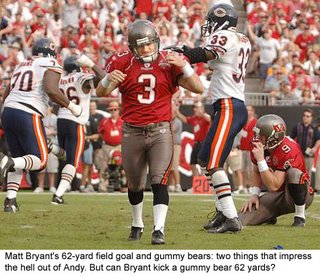 Tampa Bay at N.Y. Giants – Start Matt Bryant. Okay, that might be a little much, but anyone who kicks a 62-yard field goal deserves to be mentioned here. Good for him. Anyway, other than Carnell Williams, there really isn’t much to see from the Bucs. The passing game is wildly inconsistent. Joey Galloway will have some good games (and this one against the Giants might very well be one) but can you afford to risk him putting up zero catches? I would look to move Galloway after the next good game he has.

Quick, who has more touchdown passes, Eli or Peyton Manning? Little brother is actually ahead here, 13 to 12. It illustrates how successful the Giants have been in the passing game this season. Even against a good Tampa pass defense, Eli is a start. The same can be said for Plaxico Burress and Jeremy Shockey. Amani Toomer, on the other hand, should be on the bench. Tiki Barber has one of the more bewildering stat lines of the season. He leads the league with 647 rushing yards, leads the league with 869 total yards, and is tied for last in the league with zero touchdowns. You’d think he would have gotten one by accident somewhere along the line.

St. Louis at San Diego – Forget the team ranks for this game. San Diego might have a very good defense, but as the Chiefs showed last week, they will give up points to good offenses. Marc Bulger, Steven Jackson and Torry Holt are all good starts, and Isaac Bruce could chip in with a cheap touchdown. On the other side of the ball, you know what you’re doing. Philip Rivers, LaDainian Tomlinson and Antonio Gates should have great days.

Indianapolis at Denver – 49-24; 41-10. Those are the scores of the last two playoff games between these two squads. The Colts’ pass offense is ready to take off and if those previous scores tell you anything, Peyton Manning isn’t afraid of Champ Bailey or the Broncos’ vaunted defense. Start your Colts as you normally would. Also, despite his excellent game last week, keep Joseph Addai on the pine.

Who’s ready for more Jake Plummer?! Anyone? Hello? Wait…come back! Tatum Bell is still around, and he should play well. Despite Plummer, Javon Walker has been having a nice rebound season. Keep him in the starting lineup. If you are in a dynasty league and Jay Cutler is still available, now would be the time to pounce on him.

N.Y. Jets at Cleveland – After two 300-yard games to start the 2006 campaign, Chad Pennington has had only one game with more than 200 passing yards since Week Three. I guess all good things really do come to an end at some point. Leon Washington has slowly emerged as one of the surprises of the season. He’s a good start this week. Laveranues Coles is a marginal start.

The Browns just haven’t been able to get their offense on the same page. Without the threat of a running game, defenses have been able to take away the deep passing threat, which has resulted in a worthless Braylon Edwards. I do think he’s a bit of a sneaky start against the Jets, if only because they are so bad in the secondary positions. Other than that, you’re playing fantasy football at your own risk.

Pittsburgh at Oakland – Another week, and another injury for Ben Roethlisberger. I was trying to figure out the best way to convey how cruel the post-Super Bowl months have been to the Steelers’ quarterback, and then it hit me. Roethlisberger is being treated like these gummy bears. Let’s hope he’s as resilient as those tasty snacks. Anyway, Big Ben should play this week, but he’s not a great fantasy start. Only Hines Ward is worth considering in the passing game. Willie Parker, meanwhile, is the start of the game. The Raiders can’t stop anyone not named Edgerrin on the ground and Parker will be looking to rebound from last week.

I might as well devote some space to the Raiders, as they probably put up what will be their best performance of the season against the Cardinals. The game was a reminder of just how dominating Randy Moss can be. Unfortunately, the Raiders are still one of the worst teams in the NFL and still feature one of the weaker offensive lines. The Steelers will make this one an absolute nightmare for Oakland’s offense. Moss remains a flex option, since he showed what he’s capable of. I would just be surprised to see a repeat.

Dallas at Carolina – So a guy with under 300 yards passing for his career is going to save the Cowboys’ season? Okay then. After three straight 100-yard games from Julius Jones, last week’s game against the Giants was a rude awakening. Still consider him a weekly starter, but temper expectations with Tony Romo at the helm. Terrell Owens remains a fantasy start, but Terry Glenn has slipped to a flex player at best.

I get on the DeShaun Foster bandwagon for one week and he puts up a veritable clunker against a Cincinnati defense he should have manhandled. For shame! Anyway, avoid Foster this week, since Dallas is actually good at stopping the run. Steve Smith is a weekly starter, and he’ll continue to pull Jake Delhomme along for the ride.

New England at Minnesota – This stands to be one of the more boring games of the week. Both squads will try to run the ball as much as possible. Chester Taylor is a definite start, and Corey Dillon is a nice second fantasy option. Even Laurence Maroney is a legitimate flex starter. Other than that, Tom Brady is a marginal start and then there’s a lot of bupkis on both sides of the ball.

In sad news, the NFL has decided to crack down on its copyrighted material escaping onto YouTube. In protest of their sound business decision (uhhh…sure), I present to you this video. It’s not football, but it’s amazing.

By Andy Goldstein
This entry was posted on Saturday, October 28th, 2006 at 2:57 am and is filed under Andy Goldstein, Gridiron Goldstein. You can follow any responses to this entry through the RSS 2.0 feed. You can skip to the end and leave a response. Pinging is currently not allowed.