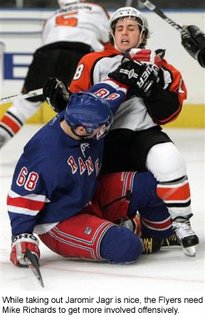 RotoRob was forced to suffer through another unacceptable effort by the Flyers last night, as they were absolutely humiliated in Buffalo, 9-1. Games like this will drive me to drink — unwillingly, I mean.

Some observations from the ugliness:

By RotoRob
This entry was posted on Wednesday, October 18th, 2006 at 10:20 am and is filed under Rink Notes, RotoRob. You can follow any responses to this entry through the RSS 2.0 feed. You can leave a response, or trackback from your own site.