Cubs Finally Get it Right 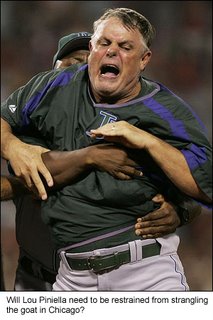 Stop the presses. It looks like the Cubbies finally did something right.

Hiring Lou Piniella over Joe Girardi, Bruce Bochy and other lesser candidates is a great first step to turn this flailing organization around.

While Bochy is a great manager (the job he’s done in a somewhat modest market in San Diego is impressive) and Girardi would also be a good choice (after all, he is the NL’s manager of the year), neither has the cache or could possibly bring the jolt to the organization that it so desperately needs.

In short, both are fine managers, but neither hiring would would be sexy move. And the Cubs desperately needed to make a splash.

Bringing in Piniella, a 19-year vet of managing who has three rings (one as a manager) and a track record for winning (notwithstanding the circus that is Tampa Bay), sends a clear message to the rest of the league that the Cubs are not willing to settle anymore.

Curse of the goat? If Piniella sees any bovid mammals, he’s as likely to punch them out just as he might throw one of his players through a wall if that’s what they need.

Piniella gets a three-year deal, with an option for a fourth season, and there’s already talk that his appointment could be a precursor to the Cubs going after Alex Rodriguez. If they can’t come to terms with Aramis Ramirez, deal him for A-Rod. Or put together a package around Rich Hill and install A-Rod at short.

Another key target for Chicago is Alfonso Soriano, who the Cubs see as a replacement at leadoff and in centre field for Juan Pierre, who’s as good as gone. That would make prospect Felix Pie expendable, so might he be part of an A-Rod package?

Carlos Lee is another play Chicago covets, but I don’t like the idea of blocking Matt Murton, who definitely showed he can play everyday.

On the mound, the Cubs plan to target Jason Schmidt, but they’ll have plenty of company in that pursuit.

The bottom line is the Cubs will have a very different look and radically changed attitude next season. Piniella is very capable of lighting a fire under his players, but will it be good enough to get the Cubbies to the Series for the first time since 1945?

You’ll have to ask the goat about that one.

By RotoRob
Tags: Chicago Cubs
This entry was posted on Tuesday, October 17th, 2006 at 2:28 pm and is filed under BASEBALL, RotoRob, Team report. You can follow any responses to this entry through the RSS 2.0 feed. Both comments and pings are currently closed.