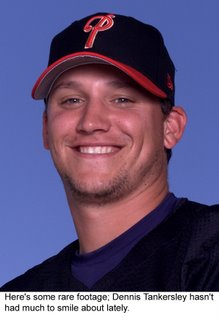 Dennis Tankersley had the world at his feet in 2001 as one of the top pitching prospects in the game. Six years later, he’s two years removed from his last major league action, yet he’s only 27. What happened? Find out in this week’s Spikes Up.

We also explore the demise of Frank Robinson and how before his firing he endangered several key members of his bullpen.

Get all this and more in this week’s Spikes Up.

By RotoRob
This entry was posted on Monday, October 2nd, 2006 at 5:04 pm and is filed under BASEBALL, Player profile, RotoRob, Spikes Up. You can follow any responses to this entry through the RSS 2.0 feed. You can skip to the end and leave a response. Pinging is currently not allowed.