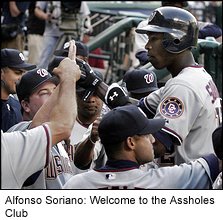 When Alfonso Soriano became the fourth member of the prestigious 40-40 club (40 homers and 40 steals in the same season), The Onion, perhaps the finest satirical news site on the net, had a great time zinging the previous members.

I mean, think about it. Jose Canseco, Barry Bonds and Alex Rodriguez would make nobody’s list of role models young baseball fans should aspire to follow. As for Soriano, let’s not forget his off-season whining about not wanting to play the outfield. Perhaps he deserves to keep this kind of company.

At any rate, The Onion has a hilarious little piece in which Soriano questions the exclusivity of this club because “it looks like they’ll let just about any asshole in.”

Looking for a good laugh? Check it out.

By RotoRob
This entry was posted on Friday, September 29th, 2006 at 4:04 pm and is filed under BASEBALL, RotoRob. You can follow any responses to this entry through the RSS 2.0 feed. You can leave a response, or trackback from your own site.