Three in the Key: Can Pierce Lead Celtics Back to the Promised Land? 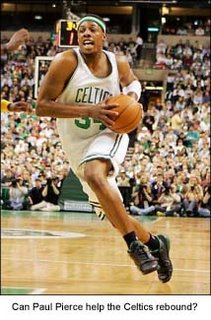 Boston recently signed Paul Pierce to a three-year extension that will potentially tie him to the Celtics until the end of the 2010-11 season.

The question is why did they do it?

This is a team that has been in rebuilding mode for the past half decade, spinning its wheels as it recycles young talent but never seems to make any progress.

However, after bottoming out at 33 wins last year, the club’s worst showing since a 19-31 mark in the strike-shortened 1998-99 season, perhaps Boston is finally taking a stand, and it wants Pierce to be the centerpiece as the club makes the long climb back into contention.

Certainly the Celtics’ choice to deal away their top 2006 draft pick (seventh overall) made a lot of sense. Boston desperately needed to address weaknesses at guard and centre and they killed two birds with one stone, sending inconsistent Raef LaFrentz, back-up PG Dan Dickau (who missed almost all of last year with a torn Achilles’ tendon), cash and the No. 7 pick to Portland for centre Theo Ratliff, a pick, and PG Sebastian Telfair.

Getting Telfair was brilliant. Boston could have used its pick on the top available point guard, Marcus Williams. But instead of getting a player just a year younger than Telfair and one who had off-court attitude and conditioning issues, they get a 21-year-old player who already has two years of NBA experience under his belt. Telfair comes ready to lead, whereas Williams would have been just another project, and one with questions surrounding him.

By also getting Ratliff to help shore up a centre position that had questions because of Kendrick Perkins’ injury last year, Danny Ainge may have made his finest move yet as the Celtics’ GM, and really helped the club get better right away ‘ not down the road at some unforeseeable point.

In that light, the Pierce extension makes more sense, especially with the Celtics’ captain coming off a career season in which he finished sixth in NBA scoring with a career-high 26.8 PPG. Pierce, who could have become an unrestricted free agent after this coming season, now can’t leave any sooner than the completion of the 2009-10 season, but that seems perfectly okay with the five-time All-Star. He just bought a new home in the area and says he wants to remain a Celtic for life and go down as one of the all-time Boston greats.

Pierce as an all-time Celtic great? Sound crazy? Maybe not. Consider that Pierce just recorded his fourth 2,000-point season. That ties The Truth with Larry Bird for the most times reaching this mark as a Celtic. Pierce also broke his own franchise records in free throws made and attempted, plus potted a career-high 50 points on February 15. Pretty impressive.

Despite all the off-season rumblings, Boston obviously will not deal Pierce, and the new contract, which calls for an 8 per cent raise if he is traded, makes it harder to move him even if the Celtics change their minds, which they have been known to do.

So let’s have a quick look at how Boston shakes out after its off-season maneuvering:

By RotoRob
This entry was posted on Friday, August 25th, 2006 at 6:09 pm and is filed under BASKETBALL, RotoRob, Three in the Key. You can follow any responses to this entry through the RSS 2.0 feed. You can skip to the end and leave a response. Pinging is currently not allowed.