The Real Teixeira is Back 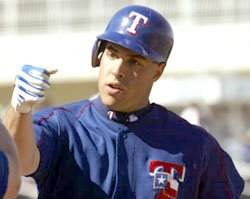 After driving in a ridiculous 144 runs last year, Teixeira looked like a shell of himself this season, producing a mere 49 runs batted in over 350 at-bats prior to the All-Star break.

Then, the real Teixeira emerged. The Ranger first baseman has been on fire since the break, driving in 23 runs in just 107 at-bats. He’s already matched his first-half home run output with nine and he’s walked 30 times to move into sixth place in the AL in that department.

This kind of run is not unprecedented by Teixeira, but it seems more shocking and sudden now when compared to his substandard first-half performance. Last year, he hit .315 with 18 homers and 71 RBI after the break. In fact, over the past three years, no one in baseball has more second-half RBI than Teixeira.

If you’re a Teixeira owner, sit back and enjoy the ride. You know at the very least he’ll be in the lineup every day as he has for 403 straight games now — the second-longest streak in Ranger history and second-longest active streak in baseball.

By RotoRob
This entry was posted on Tuesday, August 15th, 2006 at 11:49 am and is filed under BASEBALL, Player profile, RotoRob. You can follow any responses to this entry through the RSS 2.0 feed. You can leave a response, or trackback from your own site.