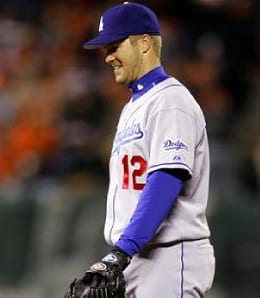 The Dodgers don’t want Jeff Kent to have another setback.

Dodger second baseman Jeff Kent continues to suffer with a strained oblique rendering rumours of a return this weekend premature. But the bigger question is where will he play upon his ultimate activation?

The Dodgers put Kent on the DL on July 18, meaning he was eligible to be activated Wednesday. A solid workout on Tuesday led to speculation that he’d be back in the lineup this weekend, but on Thursday he and the team nixed that idea, saying they planned to be extra cautious given his previous setback upon returning too early. Apparently, Kent finds tying his shoes painful at this point. Hello? Velcro laces, anyone?

Now when he finally does get back in action, he’ll find his second base spot occupied by newcomer Julio Lugo. And there’s no way the Dodgers want Kent exposed to the grind of middle infield right away, so where can he play? Currently, first baseman Nomar Garciaparra is also on the DL and is eligible to come off Wednesday, but he won’t be back that quick. So it looks like Kent may have to man first for a while.

Kent, ever the (cough, cough) consummate team player, has resisted such a move before. But now — if he wants to play — he may have to suck it up and move over to first. Once Kent proves healthy enough to return to second, Lugo will shift over to third base and send another newcomer, Wilson Betemit, to the bench.

It will interesting to see whether Kent accepts the temporary move or starts whining like a prima donna. Either way, thanks to some astute deadline deals, the Dodgers have plenty of infield options.

By RotoRob
Tags: All-Star Break, Clark Kent, Jeff Kent, Julio Lugo, Los Angeles Dodgers, Nomar Garciaparra, Wilson Betemit
This entry was posted on Friday, August 4th, 2006 at 3:13 pm and is filed under BASEBALL, Injuries, RotoRob. You can follow any responses to this entry through the RSS 2.0 feed. You can leave a response, or trackback from your own site.