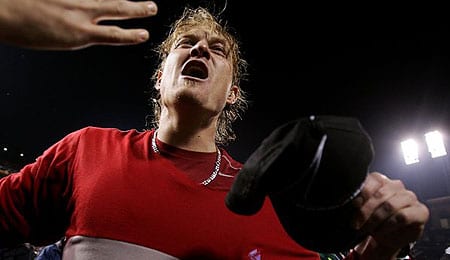 Jeff Weaver sure won’t celebrating if his kid brother takes his job.

Man, I sure hope Jered and Jeff Weaver have a good relationship. With Jeff struggling along, dropping to 3-10 after getting shelled on Tuesday night, the Angels are now talking about where they go from here. One of the solutions being discussed? Bringing back younger brother Jered, sent down to Triple-A a couple of weeks ago.

Should the younger Weaver return — and frankly, given his recent performance (6-1, 2.10 at Salt Lake with 11 Ks Wednesday night after 14 in his previous outing) he deserves to — it will probably mean Jeff will either be dealt (unlikely given his bloated $8.325-million salary), sent to the bullpen or designated for assignment.

Thanksgiving dinner conversation may be a bit strained at the Weaver household this fall.

Jeff has now joined Seth McClung as the AL’s only double-digit losers. This just in: it is never a good thing to be included on a list with Seth McClung. If you still own Jeff in your mixed league, you must be playing in one of those 50-team formats that are gaining in popularity, right? Hello? Dump him already. Hang on to him in AL-only leagues…for now.

And Jered? If you didn’t scoop him up earlier in the season, considering he won all four of his starts with the Halos, you’ve missed your chance in all likelihood. In a very shallow mixed league, he might be available, but not for long.

By RotoRob
Tags: Jeff Weaver, Jered Weaver, Seth McClung
This entry was posted on Thursday, June 29th, 2006 at 10:55 am and is filed under BASEBALL, RotoRob. You can follow any responses to this entry through the RSS 2.0 feed. Responses are currently closed, but you can trackback from your own site.