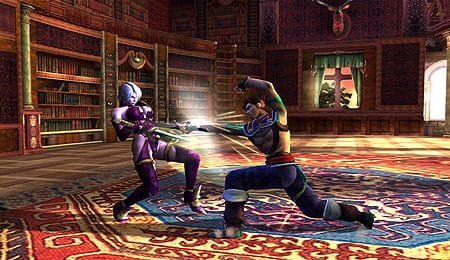 Rule No. 1 in armed combat: Wear next to nothing.

Cue the flashback sound affects. Fall 2003. A living room, amok with paper plates peppered with cold, leftover Totino’s pizza. A conscious stream of playful trash talk laden with clever obscenities hovers over the sounds of clashing steel. Epic battles are unfolding, fingers sweaty from intense concentration. Transcending history and the world, a tale of swords and souls, blah, blah, blah. Yeah, that was when Namco’s Soulcalibur II was all the rage and good times were had with friends. We wonder where they are now.

And we wonder if they’d be interested to know that this mighty title has been the latest candidate for an HD makeover and is readily available on Xbox Live Arcade and PlayStation Network. Oh, and what’s this? It’s called Soulcalibur II HD Online? Online, eh? Let’s play.

With three additional sequels that have passed since the original release of Soulcalibur II, all receiving fair praise amongst fans and critics, you’d wonder why anyone would bother playing around with this older entry. Well, the truth is that this fighting classic still holds up quite well in the controls department, and in our opinion, the series hasn’t played as tight since. Toggling between vertical and horizontal weapon attacks, kick and guard buttons, eight-way directional 3D movement, repels and parries, guard breaks, Soul Charges – ah, this was so fresh back then, and it’s still fresh now.

While there is certainly skill involved in the controls, beginners can hop in and feverishly tap their way to victory to a certain degree. This is fantastic for the uninitiated, but for seasoned fighters, it can be pretty damn frustrating to be slap-chopped off a cliff by a slash-happy Talim. Sure, the same can be said about most 3D fighters – find the fastest character and slap-chop away. But even with that said, a firm understanding and execution of the game’s tactics will usually triumph. And to have that still apply to this aging title speaks volumes about Soulcalibur II’s legacy.

When fans of a series hear “HD re-release,” you can only hope for the best. Will older and simple 3D models and textures tarnish memories of gaming generations gone by? Will it still sound as epic as you remember? The answer to this one is mostly “yes.” Even though these fighters don’t get a full blown redo treatment, they look pretty great. The only thing really standing out as dated are some various hair and fabric physics.

Other than that, the shading, lighting and textures in the environments and stages are remarkable. Those sweeping pieces of music and crisp sounds of steel colliding will roll out of your speakers like the game was made yesterday. On the down side, it’s definitely worth noting that the option to have the original Japanese voice actors is oddly missing, so purists who find the English dubs silly, start your complaining.

One of the most memorable aspects of Soulcalibur II was the outstanding amount of additional features, which was uncommon for fighters at the time. You got your standard Arcade, Time Attack, Survival and local Versus modes, plus the excellent Weapon Master mode. Here, you’ll essentially play through various tutorials, trials and special matches that will unlock new weapons for a customized aesthetic as well as new characters to master. With over 20 characters to choose from, this made for some serious content to plow through.

It is with great pleasure to say that Soulcalibur II HD Online comes complete with almost every facet of the original. During its original release, the gaming consoles each came equipped with one exclusive character — Tekken’s Heihachi Mishima for the PS2; the comic book anti-hero, Spawn, for Xbox; and the legendary Link on Nintendo’s GameCube. Obviously, the PS3 and Xbox 360 releases won’t see the green-capped hero, although both system versions get Heihachi and Spawn.

The major addition to this redo is online competitive play, much like the title implies. Unfortunately, this is the game’s weakest link by far. (Aside from not actually having Link. See what we did there?) Perhaps the dawn of next-generation consoles was too heavy for Namco to put too much effort into it, but there’s only two flavours of online: ranking matches and player matches.

On the plus side, hopping into either of these modes pretty much tosses you into a match with little fuss. After that, it’s downhill — No lobbies, no party mode, no rematches… no way! On top of that, we found the matches to have some chop and lag… so… we’re going to go ahead and blame our continuous losses on that. Yeah, that’s it. We lost because of the lag… not because we’re not a world class fighter game champion of the highest caliber.

Ahem. Anyway, a whole generation of fighters has come and gone, and it’s pretty hard not to be spoiled by today’s conventional matchmaking. With the weak set of online options this release has, the best thing is to call up your friends from 10 years ago for some good ol’ local Versus mode! “Hey, bro, I got Soulcalibur II… again! Wanna come over? Oh, right. You have a wife. And kids. And a job. *click* Hello?”

You also got Weapon Master mode and a Totino’s pizza in the fridge, so your night is officially made.

Tell your old, more “successful” friends to eff right off because you just got Soulcalibur II HD Online on Xbox 360 via XBLA or PlayStation Network for PS3. What are they doing that’s so important?! The online isn’t that hot, but its large roster of characters and modes can keep you busy for some sweet nostalgia. It set you back US$20, which is a bit steep considering its sequels can probably be found for less than that price, but you argue it’s still the finest entry in the series. Where have all my friends gone!?