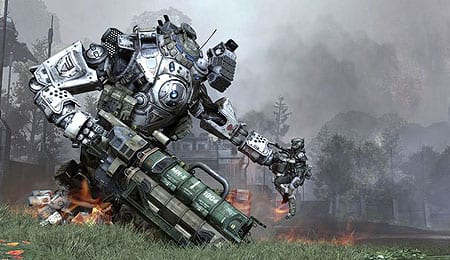 Tell me about the rabbits, George.

To say there was a lot of hype behind Titanfall would be a massive understatement. For starters, it was the first release from Respawn Entertainment, started by Infinity Ward founders and Call of Duty creators Jason West and Vince Zampella after their ugly falling out with Activision. Secondly, it was also the game Microsoft pegged as its first real system seller for the Xbox One by paying Electronic Arts some big bucks for exclusivity. So, does it live up to the hype? Let’s find out.

One of Call of Duty’s long-standing virtues is accessibility, and that tradition lives on here. Action is split between your time as a pilot and your time in a Titan, and, regardless of which one you’re controlling, they both feel incredibly smooth and responsive. Somewhat surprisingly, we actually found ourselves staying on foot for large stretches thanks to the sense of speed and agility you get while running along walls and double jumping onto platforms. It creates a vertical sense that doesn’t exist in other games and instantly makes them feel limited in the process.

Weapon accuracy is excellent, whether firing any of your three equipped guns or throwing grenades, with an undeniable sense of satisfaction. Your support kit is easily deployed via the left bumper, and the cool down timer feels long enough to prevent overuse but brief enough that you can still employ it with regularity. Add the d-pad to toss basic commands at your auto-piloted Titan and you’ve got a nearly flawless setup.

Piloting your Titan takes a little more getting used to, but once you get past that mild learning curve it really opens up. Movement doesn’t come across as cumbersome, and many of the actions used on foot translate very closely to what you do in your mech. For instance, hitting the right bumper, which tosses grenades as a pilot, has you launch your mounted ordinance. The way the game handles and moves is unquestionably its single greatest strength.

Viewed exclusively on graphical prowess, detail work and diversity, Titanfall doesn’t possess as many jaw-dropping moments as you might expect. Part of that is the sacrifice made to keep the frame rate running smoothly in the game’s online-only model. Still, while performance trumps polish, it was disappointing to find such limited variety in the game’s locations. Yeah, they’re big and well designed to accentuate fast-paced gameplay, but as a visual showpiece for the Xbox One it’s underwhelming.

Weapons and mechs look slick, creating a futuristic vibe while still grounding the technology in a way that we can identify with it. There’s a disappointing lack of customization available, however, which seems like a bizarre omission for a game that’s built 100 per cent for online competition. Instead there’s no option to repaint your Titan or add anything to distinguish it from everyone else. At a time when most online shooters allow copious micromanagement, Titanfall falls short.

There is voice acting here, though the story itself is told in such a way that we honestly don’t remember a single line of dialogue — in fact, about the only thing that stood out was how much the commander of the International Manufacturing Corporation (IMC) sounded like Idris Elba circa Pacific Rim. The impact of explosions, weapon fire and Titans slamming down from orbit hold up quite well, though, and that’s much more important to the audio side than anything else.

Despite having played both sides of Titanfall’s nine-mission campaign twice, we’d be hard pressed to tell you anything of substance about it… if there even is anything of substance. Unlike every other retail shooter we can think of, there is no offline, single-player mode to be found here with a short (albeit quite helpful) tutorial serving as the only reprieve from multiplayer competition.

Respawn Entertainment tries to shoehorn some narrative elements into the nine missions, which you’ll need to play as the IMC and militia if you want to unlock the other two Titan chassis, via pre-launch scenes and in-match dialogue. Given the frenetic pace of the action, however, we were far too busy trying to win to listen to whatever details were being presented. Even the pre-match stuff is tough to follow because you’re apt to be tweaking your loadout or sifting through burn cards, which are single-use boosts you can use during matches.

Some may argue that the target audience for Titanfall don’t care about a campaign, and that series like Call of Duty and Battlefield aren’t renowned for their single-player offerings. While that may be true, at least they present something for when you don’t feel like jumping online. Plus, by foregoing a campaign there’s no real connection to the world. You don’t need to be told who’s “good” and “bad” in CoD since it’s based on the world we live in. Here we’ve been given an entirely new planet, yet with no meaningful gravitas. It’s simply, you’re on Team A, now go destroy Team B.

While the lack of a story undoubtedly hurts, the freshness and intensity of the multiplayer largely makes up for it. Battles, while limited in scope to six on six, are consistently chaotic thanks to loads of NPCs that keep getting deployed. Killing these bullet sponges will accelerate the countdown to when your Titan can be dropped, though disposing of human players shaves even more time off. That makes each game a race to see who can call in the heavy artillery.

What really sets Titanfall apart, however, is how well balanced everything is. Climbing inside a Titan doesn’t make you an overpowered killing machine as the nimble pilots can whittle down your health by evading and peppering you with anti-Titan weaponry. They can also take on a more direct approach by mounting your mech, tearing open a panel and laying waste to it from pointblank range. Once that happens, you may be forced to jump out and engage the pilot on foot — unless you’ve got the proper countermeasures equipped.

That’s another strong point as it seems as though every strategy has an effective counter. Heavy mechs can absorb and deal tons of damage, but a quick mech might prove too hard to hit as it zips around and steadily brings the more powerful unit to its knees. A vortex shield can absorb incoming fire and redirect it back at your enemy, which helps make encounters between evenly-matched Titans strategic. The bottom line is that you never feel helpless or overpowered. Instead, the game creates a constant sense that you’re both dangerous and vulnerable.

There are 15 maps, nine of which are introduced in the campaign, and five modes: Attrition (think Team Deathmatch), Capture the Flag, Hardpoint Domination, Last Titan Standing (everyone begins in Titans and whichever team eliminates the other wins the round; first to win three rounds wins the match), and Pilot Hunter (only killing human-controlled players counts in the score).

As fun as Titanfall is to play, that’s a small selection of game types to launch with, and when you combine that with the aforementioned lack of customization, you’re asking the game’s core experience to do almost all of the heavy lifting.

In some very important ways, Titanfall is a great game. Unfortunately, you cannot overlook the fact that there’s simply not that much of it with no real campaign, minimal customization and a rather modest selection of modes. Here’s hoping future updates and DLC flesh out what’s currently an excellent core experience that’s lean on content.