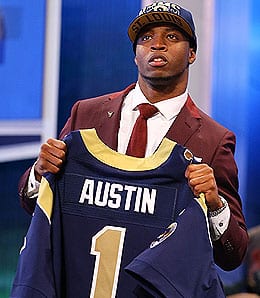 Tavon Austin could be a Fantasy factor for the Rams right away.

[Editor’s note: Please join me in welcoming Josh Johnson, who today submits his first article for RotoRob.com, a review of the 2013 NFL Draft and the resulting Fantasy ramifications. Josh will be contributing to the site’s NFL and MLB coverage.]

The first player that was drafted that could really affect 2013 Fantasy rosters is Tavon Austin. The Rams traded up to draft the diminutive wide receiver (5’9″, 181) at pick number eight. We are not sold on Austin, but the Rams do have talent and a quality QB in Sam Bradford, so he stands a chance to be a focal point. That makes Austin worth a flier in the middle rounds of your Fantasy draft this summer. However, we would not even think about him until round seven.

Other first round picks with Fantasy potential include QB E.J. Manuel (Buffalo at pick 16) and TE Tyler Eifert (Cincinnati at pick 21).

Manuel is talented, but he is no Andrew Luck. Worse yet, he has company in the form of Kevin Kolb, so Manuel will have to beat out the six-year veteran in order to start Week One. Ironically Manuel does remind us of Kolb’s former Eagle teammate Donovan McNabb. Manuel has the ability to move around and extend plays, but unlike current Eagle QB Michael Vick, his second option won’t be to run. Unless your league has 20 teams, Manuel should be available as a bye week replacement.

As for Eifert, it seems the Bengals drafted him to cover their ass in case Jermaine Gresham gets hurt. Tyler’s future as a Fantasy asset seems to me very much like Martellus Bennett’s when he was drafted by the Cowboys, who already had Jason Witten. Eifert’s production will be nothing of note at least for a season or two, so don’t get over zealous if he catches a couple of TDs early.

At pick 27, the Houston Texans acted more like the former Houston franchise when they unearthed DeAndre Hopkins, a 6’1″, 214-pound WR from Clemson. Say what you will about the competition level in the ACC. Okay, it’s not the SEC but its not exactly Division II, either. Hopkins is, to borrow an extremely redundant phrase, a “freak.” We can’t remember a player that explodes with so much speed while turning the corner. He attacks and engages defensive backs. His moves without the ball are electric and when he has the pigskin, he has great field presence. Hopkins will play opposite Andre Johnson and that in itself makes him a mid-round Fantasy option. The Texans’ offensive scheme and weapons should leave Hopkins mostly in single coverage with opposing corners locked on Johnson — especially in the red zone.

Also in the first round, the Vikings selected Cordarrelle Patterson with 29th overall pick. Raw is the word mostly associated with this kid’s skill set. The Vikings traded a whole lot to get Patterson, so they better have a recipe ready to turn this guy into a complete product. We think he has a year of learning from his failures before he really starts cooking. Patterson will get his start by lending a hand in the return game, which will get him used to NFL-style contact. That could expedite his transition.

Where have all the running backs gone? Shockingly, there wasn’t one taken in the first round and the first one that came off the board wasn’t Eddie Lacy. Rather, it was Giovani Bernard of North Carolina, grabbed by Cincinnati 37th overall. Bernard displays good hands and he is built like most successful running backs (5’8″, 202). If you play in a point per reception league, we believe he could put up numbers comparable to Atlanta Falcon Jacquizz Rodgers, who caught 53 balls for 400 yards last season.

With pick 48, the Steelers drafted Michigan State’s LeVeon Bell. He might score a few TDs as a Brandon Jacobs-type short yardage threat, but don’t draft him unless you are desperate in the closing rounds.

At pick 58, the Broncos took Wisconsin’s Montee Ball. We know what you are thinking — Denver already has a quad of RBs. Yes, this is very true, but it’s also true that they are all never healthy at the same time. That’s where Ball and his tenacious style come into play. He is well worth a late-round selection.

The Packers nabbed Lacy as the fourth RB off the board (61st overall) and they should feel very fortunate as he has the opportunity to start immediately. Green Bay needs an effective driving force to open its offense up and Lacy seems to be that guy. He should get stronger as the season grows older, which makes him an earlier season buy-low candidate if he struggles out the gate. Be patient — Lacy will get his.

This draft year did not feature a good running back class and the league is trending away from a feature back style, so we will not bore you with lofty stabs in the dark. However, we do think this Kerwynn Williams out of Utah State could be a surprise. He’s just 5’8″ and 195 pounds and that, combined with his WAC stats, concerns a lot of people. The Colts rolled the small dice when they drafted him in the seventh round, but that late, it’s clear expectations aren’t grand. We just can’t help but be reminded of Darren Sproles when we see Williams on film and that makes him worth a final round flier.

After a talented 2012 QB class ushered a new era of NFL signal callers nobody was expecting this class to garner much fanfare.

Geno Smith to the Jets (39th overall) seems like a tear-filled disaster for Mark Sanchez and the city of New York. Smith is an athlete — there is no disputing that. Based on the Tim Tebow situation, however, who knows what excuse the Jets will use for Smith’s lack of playing time. Sanchez all but smoked a cigarette while trying catch a snap and Tebow quietly prayed in the corner. When the Jets realize they have Tebow 2.0 on their hands, they might have to consider drastic measures come 2014.

In the third round, the lanky Mike Glennon was drafted ahead of Matt Barkley to back up Josh Freeman in Tampa Bay. Glennon reminds us of Dan McGwire. Who? Exactly!

Barkley, once expected to be the first overall pick in the draft before hurting his shoulder, lasted until the fourth round when he was nabbed by the Eagles. Philly needs Barkley given that incumbent Vick always misses at least two games. Barkley will register some stats, but his impact will not be truly felt until 2014.

Arkansas QB Tyler Wilson was very wisely drafted by Oakland in the fourth round. The Raiders, who can never seem to keep a QB for more than two seasons, were at it again this offseason, parting with Carson Palmer and welcoming Matt Flynn. Flynn has many uncertainties, so hopefully Wilson will not be forced early on. Wilson has a cannon for an arm, which fits the Raider way quite nicely. If he plays this year he will throw some picks — that is certain. Just don’t forget Wilson in 2014 when you miss out on a top QB in your draft.

This draft was deep with athletic receivers. In fact, every round saw at least three wide-outs taken.

The Titans scored 6’4″ slasher Justin Hunter in the second round out of Tennessee. He shows great potential for a team that always seems to have health issues at the receiver position. We see a promising future but don’t expect much more than 500 yards out of Hunter this season.

Later in the second round (41st overall), Buffalo nabbed USC standout Robert Woods. He showed strong at the Combine and many thought he was a first round talent. Ultimately the Bills believe they got great value with this pick. Woods joins Stevie Johnson in the Buffalo receiving corps and they both should produce above average years, feeding off each other.

Dallas is another team that always has health problems at receiver, which is probably why the Cowboys grabbed Terrance Williams of Baylor in the third round. This is very a talented mid-sized (6’2″, 210) WR that should succeed in the slot early on. So when Miles Austin gets hurt like he always does or Dez Bryant throws a temper tantrum, Williams should be able step in and take some of the burden off Witten.

Also in third (76th overall) the Chargers took a chance on Keenan Allen and his PCL strain. We like this Golden Bear a lot but San Diego better make sure he is fully healthy before it starts to push him in training camp. Allen might not be Vincent Jackson-caliber but at least he has a competent QB to get him the ball.

Other notables include former Michigan QB Denard Robinson (Jacksonville, fifth round, 135th overall), who is going to try his hand at receiver (we have serious doubts he will be a contributor this season), and Brice Butler who was drafted in round seven by Oakland. This well-sized (6’3″, 205) receiver could be well worth a closing round flier, because the Raiders will probably need him.

To be totally honest, we don’t see any tight end in this year’s class making a Fantasy impact (besides possibly Eifert, as we discussed above). The Raiders, who drafted two tight ends, are probably the only team that will be starting a rookie. In the sixth round, they took both Nick Kasa of Colorado and Mychal Rivera of Tennessee. Kasa is run blocker that might find the end zone a couple of times. Rivera is an athlete with a nose for the ball. No matter who the Oakland QB is, Rivera might his best option when things break down.