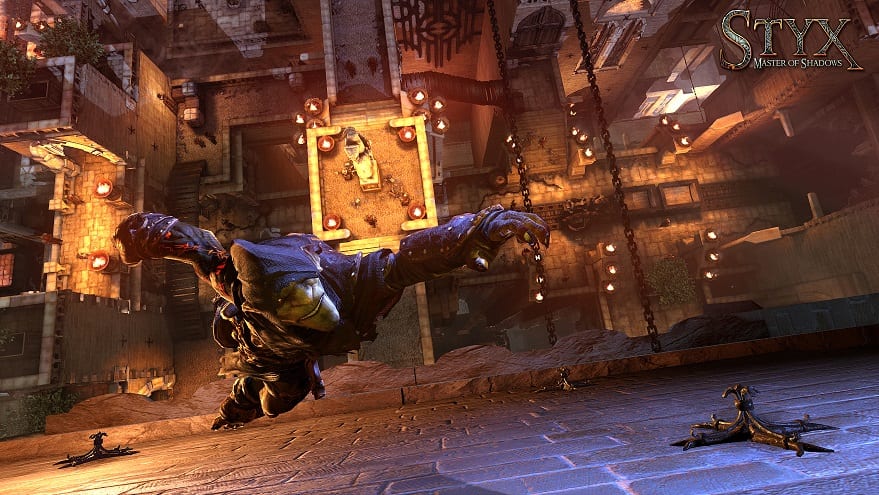 We’ve seen stealth played out as steampunk thieves, historic assassins and genetically modified super soldiers, but what about miserly goblins in a fantasy world? That’s exactly what Styx: Master of Shadows brings to consoles, and while the setting feels new, the gameplay is decidedly old school in the world of stealth. This actually works pretty well — it’s the technical polish that this game is lacking.

At first glance, the control scheme for Styx seems sensible enough and probably feels familiar to long-time stealth fans. The face buttons handle jumping, interaction, combat (more on that later) and crouching while the trigger buttons offer more specialized functionality: sticking against a wall, magic (AKA, amber), and using items (sorted and selected through the directional pad).

Learning this setup isn’t that difficult. The problem comes in the execution. There’s a combat button, but direct melee strikes aren’t allowed. Instead, you either have to wait for an icon-enabled stealth kill or a direct attack from an enemy. In that case, all combat is built on timing-based parrying. The timing for this feels loose, however, and when combined with occasionally awkward camera angles, it can create a fairly steep learning curve.

The other main control issue comes from traversing the environment. Assassin’s Creed may be the spiritual inspiration for much of this game, but Styx the Goblin doesn’t excel at parkour. In fact, his jumps are as floaty as Mega Man, which creates a bit of chaos when you need precision jumping in a 3D environment. There’s not quite the necessary stickiness you’d expect in high-risk platforming, which means things can be a bit unforgiving at times.

While Styx is released on all of the latest platforms, there’s certainly no reason why it couldn’t have been achieved on last-gen hardware. So while the sheer technical quality isn’t tiptop, the game shines through on style. From the characters to the environments, this feels like a fully realized world, and even if minor issues such as clipping and texturing pop up from time to time, it’s easy to appreciate the distinct feel the developers were going for.

Similarly, voice acting is quite effective with an appropriate medieval/fantasy vibe set by the cast. In fact, the only one who feels slightly out of place is Styx himself, thanks to his grouchy American accent.

On paper, it’s hard to believe that there hasn’t been a game like Styx before. It’s essentially a combination of PS2-era Metal Gear Solid with a dash of Assassin’s Creed, all set in a D&D-style world. As a character, Styx is likable enough, the environments are big enough to allow some flexibility in how you get from A to B, RPG-style character progression gives you choice in how you grow, and Styx’s magic abilities add a unique flavour to the genre.

However, the game is pretty difficult, and how much you enjoy it will depend on your patience level for hardcore stealth as well as your tolerance for some buggy play. It’s not Dark Souls, but there’s a learning curve that may frustrate many new gamers. For example, we’re complete Metal Gear Solid geeks, including multiple playthroughs of no-kill/all-stealth gameplay, and even we got frustrated at the trial-and-error nature of the earlier easier levels.

If you stick with it, though, you’ll find your stealth instincts become more in tune with what Styx demands. Like the original Thief, Styx’s stealth gameplay depends largely on lighting and Amber Vision (the equivalent of sixth sense vision from other stealth games). Many light sources can be extinguished in some fashion. When Styx is completely hidden, his shoulders glow orange. In lieu of some form of radar or HUD, this is your most important sneaking tool.

However, things don’t always go as planned, and unfortunately, it’s not always because you’ve waltzed in front of guards. Enemies have their own field of vision, though sometimes they can see ridiculous distances despite flickering lighting. Game objects such as buckets and brooms use real-time physics, so bumping into them gives you away. These items aren’t assigned proper weight, so just touching them sends them flying across the room and triggering needless enemy encounters.

It wouldn’t matter as much if you were either a capable fighter or a nimble platformer. Styx is neither. Direct confrontation leads to parry-based battles, which basically means you’re screwed if there are multiple enemies. Running away is often futile, since the environments don’t offer many platforming options — and even when they exist, accurately jumping on them is an adventure in itself. And since health only restores via potions, both of these often lead to dying and restarting.

That means that getting far in the game requires healthy amounts of hardcore stealth: waiting in the shadows, quietly taking down one opponent at a time, watching for enemy patterns, and planning the safest way to get from A to B. Despite the technical difficulties, there’s certainly something thrilling in the way this plays out when things go right, and that’s the game’s biggest strength. Unfortunately, if the other aspects were just a little more polished, it would create a well-rounded experience rather than force-fed patience.

Styx: Master of Shadows had the potential to be something truly unique. Instead, it winds up falling into the “pretty good” category due to technical woes. Stealth fans will enjoy it, particularly those that love fantasy environments. Just be prepared to restart a lot.