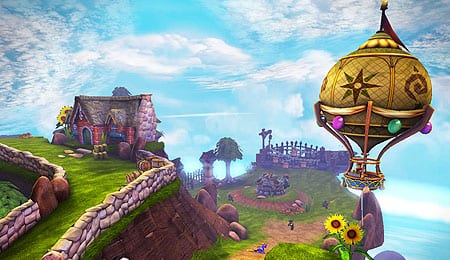 I’m telling you, kids are going to love this game.

If you’ve raised a child in the last 10-plus years, odds are you have a special affinity for Pixar. After all, it started that whole trend of making films that both kids and adults could appreciate on different levels. I bring this up because there haven’t been a lot of games (with the exception of the LEGO series) that were simple enough for kids to enjoy and play competently that weren’t painful for adults to watch and/or play along.

Well, developer Toys for Bob and Activision are changing that with the release of Skylanders: Spyro’s Adventure, a game aimed at kids that’s still fun for adults. Of course, it does come with one potentially significant drawback: it ain’t cheap.

In a theme that will run throughout the review, the controls are basic with multiple buttons doing the same things. Each character has three attacks — one primary, one secondary and then one special attack that must be unlocked — and a button to interact with objects. Opening treasure chests and gift boxes is done by waggling the right stick. My only complaint is that you’re unable to adjust the camera as there are definitely times it would’ve been nice to look around.

Switching characters is as simple as taking one action figure off the “Portal of Power” and putting another one on. It’s a very cool idea that’s well executed and is sure to please younger gamers.

There’s a very cartoonish feel to the visuals in Skylanders, which suits the intended audience well, but doesn’t necessarily make for the best looking game. The environments and enemies are pretty good with a lot of variety spaced across more than 20 different locations. Sections do tie together in a common theme usually in two- and three-level bursts; though even there it mixes things up. Some of the characters don’t look all that great.

Goofy voice acting and dialogue are prevalent, including an appearance from the person that plays Joe on Family Guy, and although it’s definitely cheesy, children of a certain age are absolutely going to eat it up — the undersized villain that can’t get anything to go his way is right in that wheelhouse. The sound effects and background music are solid.

In Skylanders, you assume the role of the Portal Master, dispatching your available assortment of Skylanders to rebuild the Core of Light and thwart the vertically challenged yet still wholly evil Kaos, who wants to rule Skylands. The game comes packed with three characters, but there are over 30 available spanning eight different “elements.” Each type has access to certain areas that none of the other seven classes do, which means that you’ll need to own a minimum of eight characters to explore the game’s entirety — more on that later.

When playing through this title you’ll find your adventures fall under one of three basic categories: action (read: combat), exploration and puzzle solving. All three of these elements are geared at younger gamers, so don’t expect too many brain teasers or devilishly concealed secret passages. Combat does encounter a few difficulty spikes along the way, but if you own enough Skylanders you can just keep swapping them out for fresh ones.

If that doesn’t sound like much fun, well, it actually is. The story is enjoyably told with interesting characters and the game is constantly mixing those three base elements together to keep things moving along at a brisk pace. And although it isn’t really difficult for a seasoned gamer, it’s not painfully easy, either. In fact, Skylanders is balanced enough to be one of the rare titles that makes for a fun co-op experience between a parent and child.

Each of the game’s 20-plus chapters comes packed with a checklist of objectives, not all of which you’ll be able to complete with the default assortment of Skylanders. Par times and things like not losing a life earn you check marks, but locating collectibles makes up most of the secondary objectives with basic treasure chests, legendary treasure and even stat-boosting hats to be tracked down.

As the term “stat boosting” implies, there is some modest RPG elements at work in Skylanders. You gain experience by defeating enemies, leveling up (you max out at 10) to increase things like maximum health, speed and armour. Plus, in addition to the temporary enhancements provided by hats, you can also earn permanent boosts by completing heroic challenges. Each Skylander has their own unique challenge, but the characters can attempt all of them.

There’s also an inherent coolness factor associated with the hook — real world action figures that you place on a glowing portal (plugged into your USB port) that suddenly appear on TV. I cannot even fathom how awesome I would’ve found that as a child, and therein lays one of Skylanders’ biggest potential drawbacks: economics.

Now to be fair, let me preface what I’m about to write by pointing out that the starter kit, which retails for US$70 and comes with the game, portal and three characters, provides a lot of content with a lengthy campaign that can be played alone or with a partner and a fun little PvP multiplayer. However, there’s no question the game is designed to get kids to want more. Throughout the game you’ll find soul gems that contain special abilities unique to each Skylander. Upon finding one you’re offered the chance to preview the character it goes with, which is essentially an in-game commercial.

Characters can be bought at a suggested retail price of US$7 apiece or in three-packs for US$20. Now do the math on what it would cost to snag the other 29 action figures that aren’t included, not to mention adventure packs that add new areas. It’s basically DLC except that all the content is already on the disc, which historically has proven to be something that rankles gamers.

As a game, Skylanders: Spyro’s Adventure is about as good as it’s going to get this holiday season for parents of grade school age kids — especially if you’re looking to play something together. Just go into it with eyes wide open, and by that I mean that there’s well over US$100 worth of add-ons that your kids will undoubtedly be clamouring for. If you’re OK with that, then Skylanders is a slam dunk.