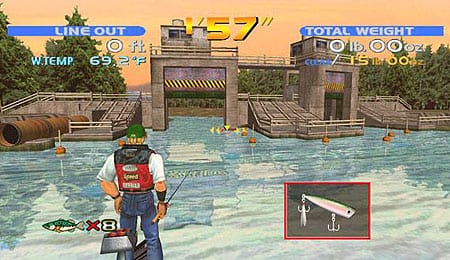 Sega Bass Fishing looks and plays exactly as you remember it.

During the late 1990s, the arcade game industry needed something to keep momentum going. As the Street Fighter 2/Mortal Kombat era started to dwindle, many game manufacturers started distributing peripheral-oriented gimmick games in hopes of retaining arcade goers. From deer hunting to bowling, many of these games still linger around bars and restaurants.

A staple of this era was Sega Bass Fishing, and a decade later, an arcade port comes to the Playstation Network and XBox Live; the PS3 version comes armed with Move support. Now, keep in mind that this was also a Sega Dreamcast release, and the Dreamcast version had a fishing reel peripheral, which is essentially what the Move duplicates. (A physical copy version also came out for Wii a few years back.)

Is this trip down arcade-memory lane worth the cost of some fishing lures? Let’s find out…

Note that Sega Bass Fishing isn’t a fishing simulator, it’s a arcade-friendly fishing game. Your controls consist of a button to reel in the lure (with or without the fish) and left/right/up/down movement to turn your rod. If you have a Playstation Move, it’s tilt-based control with rumble feedback as opposed to the analog stick. Your reel speed depends on how hard you press the reel button, so some analog sensitivity is involved with that.

That’s pretty much it — this is an arcade game, after all.

What happens when you port over a late 1990s arcade game? You get late 1990s visuals that could have essentially been upscaled PSone graphics. The environments fare slightly better than the characters, but not by much, and there’s not a heck of a lot of variety here. Three areas with different background “lighting” (not actual in-game lighting, but painted backgrounds) based on time of day, along with an unlockable bonus area, give you a number of environments to pick from. The fish and the fisherman/woman are relatively blocky lo-fi 3D models, but at least the fish animate well.

Back in the 1990s, you couldn’t really hear any of the actual audio in an arcade game because of the noise around you. You weren’t missing much, as the voiceovers consist of a very excited generic male voice yelling “That’s a big one!” and “Time’s up!,” all over the score of stock-library genera-rock. Seriously, you could have cut and pasted this stuff into the developer code for racing, table tennis or kayaking games and it would all be the same thing.

Did I mention this is an arcade game? Select your lure, cast it, and try to entice a fish. Once the fish bites, you’ll tilt your rod (analog or Move) to fight back, all while reeling the sucker in. It’s pretty straightforward, though a small bit of depth is added with lure selection, as different lures have different properties — some float, some sink to the ground, etc. Sega Bass Fishing comes with Arcade Mode and a new Original Mode. Arcade mode is a replica of the arcade game — pick your location and try to catch a certain amount of finish given the time your virtual quarters have bought to clear a level. You won’t be emptying your pockets for change when you run out of time, though, as a simple Start button helps you continue.

Original Mode bring in a tournament feel to see what you can catch in a longer span of time. By competing in the virtual tournament, you can advance to new areas with other fish and environments, though it’s all a mix of assets from Arcade Mode. This is tied into online leaderboards, so if you ever wondered how well you’d do in virtual fishing compared to some guy in France, now you know.

Overall, the actual gameplay is fun for about 20-to-30 minutes, which is what you would have spent with it in an arcade before going to get some pizza or play skeeball. What it does, it does reasonably well, and if you’re already a fan of fishing or the original game, this isn’t a bad distraction and it’s fun to show guests. Just don’t expect to get too much out of it.

One-trick motion controller games are best left in mini-game collections. That’s why Wii Sports and Sports Champions still have some playability (gotta love that table tennis) but I would never purchase the individual components. Sega Bass Fishing hasn’t evolved since the late 1990s, so the value of the game depends on how much you like the original title and/or fishing.