Breaking News: Bourque and Roy Back with Avs 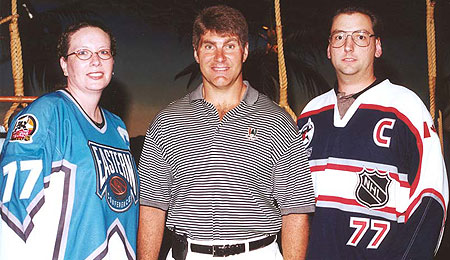 Ray Bourque (er…he’s the one in the middle), is returning to the scene of his Stanley Cup glory, but don’t worry, he’s not bringing his two friends with him.

The Colorado Avalanche went back to the future to lock-in the final pieces of what they hope will be another Stanley Cup run, re-signing defenseman Ray Bourque and goalie Patrick Roy.

Bourque won the Cup with Colorado in 2001 and then retired, doing charity work in the Boston area. He was also a consultant to the Bruins. Roy retired in 2003 and became vice president of operations for the Quebec Remparts, part of Quebec Major Junior Hockey League. Most recently, he was suspended five games for sending his son into a playoff brawl.

“[The suspension] was definitely a factor in my decision to come back. It made me realize how much I missed the game. And I’ll deal with the fallout from my decisions when the NHL season ends,” Roy said at a press conference announcing the surprise signings.

Roy will displace goalie Jose Theodore, who, while having a strong season, is still not believed to be back to his Vezina form.

“I never really stopped preparing to come back, even when I wasn’t sure I would ever come back,” Roy said.

For Bourque, the decision to return to Colorado was more sudden: “I’ve been watching [Detroit defenseman Chris] Chelios, and I feel like if he can do it, I can do it.”

Bourque explored a comeback with Boston, but the Bruins ultimately said it would be more of a distraction.

“They told me to feel free to go back to Colorado, though,” Bourque laughed.

Bourque and Roy are eligible to play in the Stanley Cup playoffs due to a sly sleight of paperwork by Avs’ GM Francois Giguere. Giguere quietly signed both players as coaches before the trade deadline and an odd quirk of the CBA allows coaches to be eligible for the playoff rosters, as long as they did not play during the regular season.

“Trust me. No one knew about this,” Giguere said. “It was me, Paddy, and Ray. And believe me, I wanted to tell everyone.”