Video Game Review: Ratchet and Clank: Into the Nexus 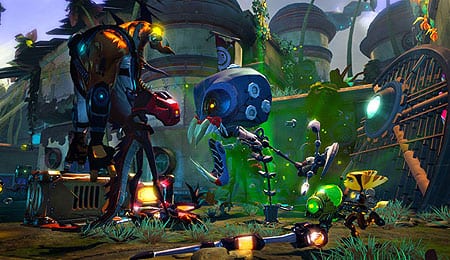 I told you not to play with that jack in the box.

Ratchet and Clank is one of those rare series that can offer more of the same without feeling tired. In fact, the most recent entries, All 4 One and Full Frontal Assault, actually suffered from their attempts to shaking up the formula. Into the Nexus sees the series going back to the basics, offering the first traditional Ratchet and Clank since 2009’s A Crack in Time, albeit in a smaller US$30 package. While the game does suffer a bit from its brevity, it manages to put the series back on track after a few stumbles.

At this point, Ratchet and Clank has an incredibly solid foundation in place, so it is no surprise that the game controls exceptionally well. Weapons feel powerfully goofy in a way that seems just right. Both Ratchet’s 3D segments and Clank’s 2D ones have outstanding platforming controls, too, ensuring the game remains a joy to play.

However, series fans may be put off by the game’s sudden transition to 30 frames per second rather than the usual 60. The cut in frame rate makes the game feel noticeably rougher than previous entries. Newcomers will be fine, and the game still controls well at a stable frame rate (except one instance involving an epic explosion, killing over 20 at once), yet as a fan of the series, seeing a drop such as this did hurt the overall experience.

Ratchet and Clank has always been one of the PS3’s best looking titles, and Into the Nexus continues this trend. While the best looking PlayStation 4 and Xbox One games may have removed the wow factor that Tools of Destruction had, it does not take away from how gorgeous this series has remained. The series’ excellent art direction plays a strong role in this, though none of the areas impress the way ones such as A Crack in Time’s “Great Clock” did.

As usual, the music is good but not memorable. Sound effects more than make up for this, however, as they match the weapons perfectly and make collecting bolts an incredibly addicting endeavour. Voice acting is fantastic as well, giving the same talent and delivery we would expect from an animated movie.

However, the story it’s telling feels a little lacking by series’ standards. Despite some wonderful designs, the two villains are ultimately boring and underdeveloped. The plot also feels very rushed, like it is missing a few cut scenes or levels to make it feel like more than just an excuse to tie gameplay segments together. It’s not bad and does not hurt the gameplay, but we just expect more from Ratchet and Clank — it really could have used an appearance from Dr. Nefarious or more involvement from Captain Qwark.

There is a gun. It plays “Jingle Bells” when you fire it. Then enemies turn into snowmen. Then the snowmen explode into presents. Most shooters would never dream of adding such a thing, yet in Ratchet and Clank weapons this wacky are the norm. Into the Nexus offers 12 different weapons, all of which are a blast to use. Even the more basic weapons can be upgraded with neat side effects such as the shotgun making enemies hover in midair.

These upgrades are added in two ways. The first is the series’ staple upgrade system in which dealing damage adds experience. This makes firing weapons ridiculously addicting, as you just want to take on one more pack of baddies to get the next upgrade. The drop to three upgrade classes instead of five is disappointing, however, even if it makes sense in a shorter game.

Weapons are also upgraded in more minor areas using crystals that are littered throughout the level. These can up the ammo count, increase the damage, or add special side effects. While not as addicting as the normal method of upgrading weapons, this complements the process nicely.

There are a few new elements added. Most significant is something we believe automatically improves any video game: a jetpack. This proves true in Into the Nexus as well, though it’s not a perfect addition. In combat, the jetpack is amazing, allowing for aerial battles, which are unique and allow enough freedom to keep firefights fun while airborne.

Travel with it is more of a mixed bag. On an open-ended planet based around collecting enemy horns, it is a blast as it adds a lot to exploration. In a more linear sewer area, however, its slow speed is annoyingly noticeable, which is especially bad during an escape sequence. We feel like including a way to alternate between slow and fast traversal could have helped. It is still a fantastic addition, though, which we hope is here to stay.

Clank also has his own 2D side-scrolling levels based on manipulating gravitational pull. These do a nice job of changing the pace and offer a decent challenge. That being said, they were the perpetrator of one of the game’s biggest shortfalls — not adequately explaining all the new mechanics. We spent five minutes trying to get Clank to jump up a ledge before we found out the right stick would make gravity shift toward the ceiling. Some mechanics were explained well, but others were similar to this and felt confusing for a while.

The game’s short length may seem offputting at first with just five planets taking roughly 6-to-7 hours, but Challenge Mode (basically a New Game Plus) provides weapons with another round of upgrades, making a replay just as addicting and fun as the first go. It retains the most addicting aspect of the series and having access to every weapon throughout the entire experience adds a lot of fun to the return trip.

Glitches do hurt the experience, however. Hit detection and traversal could occasionally get wonky, which, while infrequent, was noticeable. There were also two instances when Ratchet got stuck in the environment, one of which we were not able to get him out of. This felt especially bad in such a short game.

Into the Nexus would rank somewhere in the middle as far as Ratchet and Clank games are concerned. However, expecting a game to exceed past entries like Up Your Arsenal and A Crack in Time is somewhat unreasonable at the lower price point. Into the Nexus does the series justice and is a fantastic game for both younger and older audiences alike.