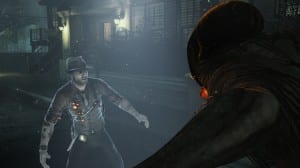 Conceptually, Murdered: Soul Suspect sounded right up our alley. We’ve long been pining for a truly great procedural crime narrative, so while the supernatural angle didn’t thrill us, the act of solving your own murder held a lot of promise. L.A. Noire came the closest to delivering the cop experience we wanted, but it stumbled in some important areas. Could Soul Suspect pick up the slack? Let’s find out.

For a game based so heavily on simple activities like exploration and object interaction, Soul Suspect still manages to feel clunky and imprecise. This holds true with the game’s limited action sequences as well, and the culprit is the same for both aspects: action prompts not appearing. During exploration it ends up being a simple matter of camera manipulation, moving it around until the collect or examine prompts appear. Combat, however, is much more annoying.

While moving through the shadowy netherworld, you’ll occasionally be confronted by demons. These creatures cannot be fought head on, and thus you must approach them from behind. Once you’re close enough, a prompt appears to hold the right trigger to execute them… except when it arbitrarily decides not to, allowing the demon to turn and attack. Generally we were able to escape them, but even so it added up to a lot of frustrating moments and wasted time.

A clever blending of present-day Salem, Massachusetts, with a ghostly version of its past gives Murdered a unique and interesting backdrop. Unfortunately, the scope of the town is limited with lots of dead ends that funnel the action in very rigid paths. Characters are nicely rendered, though it sure seemed like a lot of non-player characters (even those with speaking roles) looked remarkably similar to one another. The game’s demons, which appear to draw inspiration from the Dementors seen in Harry Potter, are legitimately creepy with their unnatural, spastic movements.

Given all the stereotypical spooky locations you visit — a graveyard, a church, an old house where bad things happened — you’d expect more from the audio side to build tension. Outside of the demons’ nasty screams, though, it’s underutilized… perhaps since you’re already dead the developers felt such tricks were unnecessary. The voice acting is good, even if the dialogue is a little cringe worthy at times, and the soundtrack is decent enough.

Your own grisly murder in the game’s opening moments leaves Ronan O’Connor stuck in the afterlife, and the only way to move on (and join your already-deceased wife in eternal bliss) is to figure out who is behind the mask of the Bell Killer. However, it won’t be easy since your spirit form can’t move freely through buildings — the in-game explanation is that any building that has been consecrated will prevent you from entering it without benefit of an open door or window.

If it sounds strange for a game whose biggest hook is that you’re dead and investigating from beyond the grave to limit your movements, unfortunately it’s just the beginning. You have a handful of ghostly powers at your disposal, but only one of them (teleport) can really be used at your leisure… and even that doesn’t get unlocked until later in the game. You can possess pretty much any living NPC, but there’s really no point since most times you’re limited to reading their mind for a pointless one liner. You can poltergeist inanimate objects, but NPCs won’t react unless they’re supposed to, and so on.

It’s easily the game’s biggest misstep to imbue Ronan with these supernatural abilities, and then immediately hamstring him by only allowing them to be used in specific situations. It makes for a limiting, linear approach that stifles outside-the-box thinking from start to finish, leaving you only to determine what the developers intended and then execute it.

Moving beyond the limited scope of your skills, Soul Suspect’s gameplay consists of three activities: explore the city of Salem, collect clues to solve mysteries and fight demons. Much of the game’s run time depends heavily on the exploration hook as the city is littered with collectibles that provide added insight into a number of topics.

As you progress, you’ll encounter mysteries that need to be investigated, which generally consists of moving around the crime scene and finding clues. Once you’ve located enough you’ll be able to “solve” the problem by properly identifying the most important clues. It’s a fine, if sometimes frustrating, system, but it’s one that won’t let you fail. Incorrect deductions will affect your rating, but there appears to be no benefit to doing well or consequence to a poor showing.

Thankfully, the story itself moves along at a pretty brisk pace, and the game’s two primary characters (Ronan and Joy, a teenage medium who becomes Ronan’s partner in the real world) are easily its two best. On the downside, we could see where the story was headed long before it got there, and we have to think most will figure out who the Bell Killer is, which is unfortunate.

Ultimately, that’s the theme of Murdered: Soul Suspect. Interesting and promising ideas undercut by questionable execution and decision making. We largely enjoyed our romp through Salem, but when the credits rolled we realized just how many “what ifs” had materialized during our time.

In many ways, Murdered: Soul Suspect reminds us of the original Assassin’s Creed in that it lays a lot of interesting groundwork while featuring just enough significant missteps to not be a great game in its own right. We do hope Airtight Games and Square-Enix push ahead with a sequel because there could be some mileage in a more polished, less restrictive experience.