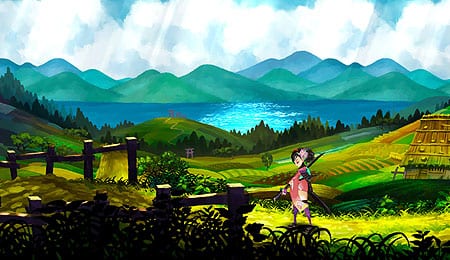 The art style of Muramasa Rebirth is fantastic.

With very few exceptions, by the time Muramasa: The Demon Blade found its way to the Nintendo Wii back in 2009, I was already done playing the console. Thus, I had no idea what to expect with Aksys Games’ recent release of Muramasa Rebirth, an updated port for the PlayStation Vita. After playing through it, I find myself wondering what else I might’ve missed by throwing in the towel on the Wii.

Despite its move to the Vita, Muramasa completely foregoes any gimmicky controls and sticks with the fundamentals: basic/special attacks, jumping and switching blades. You can chain together combos to pound away on your enemies, and defensively you can block, deflect, parry and evade. It all flows very smoothly with your swords’ condition degrading through continued defense — eventually your sword will break, rendering it basically useless for the duration of that battle (though they can be repaired with certain items in your inventory).

One annoying item is that jumping and interacting with the environment share the same button (X), and there are moments when you can accidentally travel to another screen while simply attempting to execute a jump. Also, when traveling downward it’s way too easy to fall an additional level, which can be frustrating when facing multiple enemies on different tiers of a location.

Visually, Muramasa Rebirth looks like it was made for the Vita’s OLED screen as the beautiful hand-drawn backgrounds and characters pop off the screen. Running through the varied locations and squaring off against ninjas, samurai and other mythological foes is an absolute treat, and it’s one of those titles that passersby can’t help but take a look at the colourful world in action. There are times when the lush 2-D backgrounds will obscure enemies behind foreground elements, but other than costing me some time-related XP bonuses, it was a non-issue.

Voice acting here is entirely in Japanese with English subtitles, and, while some may wish for an English dub, it’s a decision I’m entirely on board with. Hearing heroes and villains alike growling out their lines is perfect given the setting and storyline. The soundtrack is excellent as well, offering up the appropriate acoustics throughout the game.

A side-scrolling action title with RPG elements, Muramasa Rebirth offers two unique storylines: one that follows Kisuke, a ninja who has lost his memory, and another with Momohime, a princess that has been possessed. Both tales take place in the same physical locations, but beyond that they are almost entirely unique and offer more than enough reason to tackle the game twice. Multiple difficulty settings can really test your skills as well, offering up plenty of challenge for those looking for extended play.

While the game does have exploration and light platforming, most of the experience is built around combat, which is initiated when an exclamation point appears on the screen. In some instances this will lock the screen in place (no scrolling) with enemies materializing out of thin air, while in others they’ll swoop down from the sky and the screen will continue to permit you to move vertically. Boss battles also allow for full movement throughout an area’s entirety.

Fights are more than just button mashing, especially as you advance and face tougher foes. You’ll need to monitor the condition of your blades — you’ll eventually have dozens to choose from but can only carry three into battle at a time — along with the various items you have at the ready. In addition to sword status, you also need to pay attention to your health (represented by a burning candle) and spirit energy. Collecting the latter helps repair your blade, and when full you can unleash a quick draw attack that affects all enemies on screen.

Upon completing a battle some text pops up, breaking down your performance and informing you of how much XP you earned. You receive a base amount based on your enemies along with a number of potential bonuses for things like finishing quickly and taking no damage. Earn enough XP and you’ll level up, which boosts your strength and vitality — the two deciding factors as to whether or not you can wield a particular sword.

Defeating the game’s bosses bestows new “demon blades” on your character, and each successively more powerful weapon will allow you to bypass locked gates and access new areas and challenges in classic “Metroidvania” fashion. Demon blades represent just a small percentage of the available weapons, however, as you can also forge new ones at a cost of spirit (found in food you cook or purchase) and souls (culled from defeated foes).

As much as I enjoyed Muramasa Rebirth, there are a couple of issues that hold it back. From a combat perspective, enemies are able to attack you from off the screen, which I’ve always found to be “dirty pool.” It’s particularly troublesome in boss fights and challenge stages in which your virtual life is in jeopardy and serious damage can be inflicted from a projectile you never saw launched. With some flying enemies it almost seems like a deliberate tactic, and an annoying one at that.

There is also a lot of backtracking. It’s one thing to offer it as an alternative — after all, you do earn XP and level up during those times — but the limited fast travel system in place is sub-par relative to most modern games. After getting a new demon blade I often wanted to go back and face new “Caves of Evil” (read: challenge stages) that I couldn’t unlock before. In reality, however, I often didn’t simply because I didn’t want to retrace my steps through umpteen sections to get there.

With an exquisite presentation, fast-paced combat and loads of content, Muramasa Rebirth is a great fit for the PlayStation Vita. It can be played and enjoyed in short bursts and longer sessions, and its few shortcomings never seriously threaten the overall enjoyment. If you have any affinity for this type of action title you would do well to scoop it up immediately.