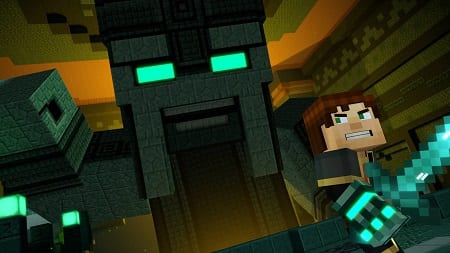 For whatever reason, TellTale Games has been far more aggressive with the pacing of its collaboration with Mojang than with any of its other series — for example, Season One of The Walking Dead dropped in 2012, and we just recently wrapped up Season Three. For comparison, Minecraft: Story Mode — Season Two‘s debut is already the series’ ninth episode in less than two years.

Season One struggled to find its footing, particularly in the middle part of its initial five-episode run, but it ended strong and the three-episode Adventure Pass suggested it’d found its niche. Now let’s see if TellTale was able to sustain that momentum in Episode 1: Hero in Residence.

It certainly feels as though TellTale made a concerted effort to ramp up the interactivity relative to most of its series. There are quick-time events, fixed-perspective combat in which you can dodge and strike, crafting and even the opportunity to build a statue.

Aaaaaaaaand… none of them are really engaging, which just serves to reinforce that story/character development and meaningful choice are what makes TellTale’s games enjoyable. Within that context there’s little doubt that QTEs work the best as they don’t slow the pace and typically don’t overstay their welcome before returning to the story.

For as intentionally simplistic as Minecraft‘s graphics are, Story Mode Season Two sure seems to struggle with all manner of glitches from really bad lip synching to no dialogue coming out (even when the subtitles and on-screen histrionics suggest there should be some). However, the colour palette and architecture are nice, allowing the game to retain a certain charm.

Patton Oswalt returns as male Jesse, and he delivers his lines well. Your new intern Radar and seasoned adventurer Jack get most of the best material, and they do a good job of establishing themselves as the new additions to know. On the villain side, the voice of The Admin is suitably creepy. While Minecraft doesn’t maximize its music the way other TellTale series do, it’s still solid.

You’ll be given the option to import your decisions from Season One, which only take a couple of minutes, or start from scratch. The opening section is clearly aimed at returning players, however, as you’ll hang with your old crew, walk through the town you’re now running, bump into secondary characters you met in previous episodes and get updates on others that are off adventuring.

Even as a returning player it’s a rather ponderous beginning, so we can only imagine what prospective newcomers will think as you bounce from one menial task to the next. Granted, you can skip some and go straight to meeting up with Petra, but your adventure with her to track down a llama (which, to be fair, is super cute) and then square a debt for her isn’t much better.

Things start to pick up when you return to Beacontown looking to rid yourself of a pesky artifact by enlisting the help of adventurers Jack and Nurm. From there it’s off to a mysterious underwater temple that houses an object Jesse needs, and an adversary the likes of which hasn’t been seen before.

As you’d suspect in the first of a five-episode arc, a good chunk of time is spent checking in with the characters from last season and putting the pieces in place for future episodes. Hero in Residence is reasonably effective in that, adding some new heroes along with both a serious threat (The Admin) and a comedic foil (Stella, the leader of alleged rival Champion City).

Despite its slow pace and dearth of notable choices, Hero in Residence does end on a high note that promises a more action-heavy and intense road ahead — one that we’re curious to follow.