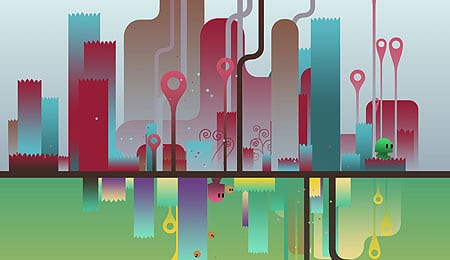 Platform through a minimalist world in Ibb & Obb, a unique co-op experience.

It’s not often that a pure co-op game comes along but Ibb & Obb might just fill that niche. A platformer with a minimalist aesthetic, Ibb & Obb can be many different things — frustrating, creative, beautiful, sparse, and fun — all at the same time. But is it for everybody? Not necessarily.

The first thing you should know about Ibb & Obb’s controls is that the game shouldn’t be played single player. By default, a character is moved by the left analog, including jumping. Buttons are deactivated outside of the Start menu. This is fine when you’re playing co-op (either online or local) since your only real interactions are moving and jumping. The problem comes when you try to play Ibb & Obb by yourself because the second character’s controls are mapped to the right analog. Since some of the game’s puzzles and challenges involve timing (as well as the collection of gems from defeated enemies), it’s easy to get disoriented in your movements. In particular, when you have one character in the normal gravity and the other character in reverse gravity, moving between left and right analog sticks and separate characters becomes headache-inducing.

At first glance, Ibb & Obb looks like a mash-up between the Pixeljunk games and the original Super Mario Bros. series of platformers. Bright colours are splashed across the background and environment as basic geometric characters along the lines of Q-bert live in this bizarre land. The landscapes feature holes with contrasting colours in which the laws of gravity flip, providing a few moments of mind-bending mental interpretation. It’s a distinct aesthetic that offers a unique statement while not breaking any new ground.

Ibb & Obb’s soundtrack is a fairly generic blend of soothing electronic music, like something you’d hear in the background of a self-help video. The game is fairly bereft of sound effects too, so it’s a minimal auditory experience.

Ibb & Obb is a platformer stripped to its bare bones. There’s no princess to rescue or evil doctor to defeat. Instead, Ibb and Obb (AKA, the green guy and the purple guy) are driven to move from left to right while overcoming environmental obstacles. The environment has a clear horizontal border that acts as an equator of sorts — above the line, gravity acts normal and below the line, gravity is reversed. In addition, green and purple lines provide colour-coded barriers to certain areas. Momentum and speed carry through, making jumping from great heights through the gravity border the closest Ibb & Obb gets to Sonic the Hedgehog pacing.

In many cases, height and distance puzzles are based on a combination of manipulating your options while going between the normal and upside down environments. Touching enemies will cause you to “die” in the traditional old-school platformer sense, though you can pretty much retry things as much as you want. Thus, the only tension you really feel playing Ibb & Obb is any sort of mental frustration behind figuring out a puzzle or collecting the gems that explode out of enemies before they fade away. The puzzles, which start off simple, become challenging early on, and you’ll spend plenty of time scratching your head before the a-ha moment clicks in — and when that moment comes, it offers more than a few moment of brilliance.

The entire game is built around co-op, which means that you’ll get a strong sense of teamwork when solving puzzles. However, timing and placement are also required, particularly in later levels, so your patience with the game may also depend on your patience with your Ibb & Obb partner.

Good platformers often depend on pace and rhythm, but Ibb & Obb is devoid of that, focusing mostly on puzzle challenges. Its gravity split is certainly a unique mechanic, though without any real tension — gameplay or dramatic — to push things forward, your enjoyment of Ibb & Obb will depend on how much you enjoy the puzzle aspect of platformers. Because of the game’s focus on co-op, it can create a unique experience that creates the best out of playing with someone else — or it can just frustrate the hell out of you.