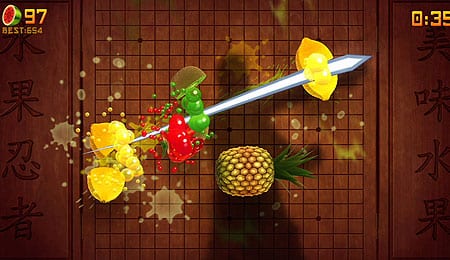 When life gives you lemons… chop them in half immediately! And the pineapple, too.

When Microsoft announced its Summer of Arcade lineup, I was surprised to see Halfbrick’s Fruit Ninja Kinect getting such a prime spot. Clearly, however, Microsoft continues to push the Kinect peripheral, and the popular iOs app represents the first Xbox Live Arcade title to feature it. Still, the questions remains: can a casual affair like this hold its own amid games like Bastion and Insanely Twisted Shadow Planet?

Like the ads say, “you are the controller” in Fruit Ninja Kinect. The game features one-to-one slicing and dicing of various produce with your hands serving as the blades, while a shadowy version of your upper body is shown against the background to help you track your movements. It’s not as responsive as the touch version, but given the inherent limitations of the hardware it holds up quite well.

Sending your arms gliding and arcing through the air is a lot of fun, and probably 95 times out of 100 the Kinect will read your movements perfectly. Of course, that leaves instances where it doesn’t, and you’ll hit a bomb while just resetting your arm position or only register a dozen hits on a score multiplying pomegranate instead of your usual 50 — for no discernible reason.

It’s also worth noting that menu navigation is pretty sloppy. This is particularly noticeable when trying to scroll through the various blade and background options you unlock as you play. Clearly it doesn’t affect gameplay at all, but it can still be annoying.

There’s not much to say here. The game’s visuals consist almost exclusively of fruit getting tossed through the air, which is both vibrant and colourful, and simplistic backgrounds. On the audio side you can expect cool slashing noises and a passable soundtrack.

For those unfamiliar with the game, you play as Jinsei Watanabe, an orphaned ninja whose entire clan was murdered by a gang of kumquats. Now an adult, you must seek revenge by… anyone buying this? No? OK, I confess, I made that up. There is actually no story in Fruit Ninja Kinect. Instead, you simply wait for different types of fruit to be “tossed” into the air from off screen, and then you cut it in half.

There are three variations on that theme: Classic, Arcade and Zen. In Classic mode you play until one of two things happen — either you slice a bomb (ending the game immediately) or you allow three pieces of fruit to fall back down. In Arcade, you’re given one minute to slice as much fruit as possible. Bombs are still present, though they only result in a point deduction, while bananas grant special bonuses (like slowing time). Lastly, Zen mode allows you to carve up fruit without the threat of bombs.

A two-player “Party” mode is also included for co-operative and competitive games. Now in the interest of full disclosure I should acknowledge that I don’t have the ideal amount space between the Kinect sensor and my playing area, which makes two-player games a bit tricky. That being said, none of the other games in my library have led to as many collisions as this one. Nobody got hurt, but it wouldn’t be shocking to see some hard hand/wrist impacts. That issue aside, multiplayer is a fun addition.

With just four (similar) modes, none of which figure to last more than a couple minutes at a go, the big debate will undoubtedly be the classic “bang for your buck” — especially since at 800 MS Points it costs 10 times as much as its iOs counterpart. Is it the type of game you’re likely to play hours at a time? No, but that’s not necessarily a bad thing. As any hardcore gamer will tell you, the Kinect is aimed primarily at a casual audience, and as such Halfbrick’s port is a respectable value.

While I’m sure some will bristle at the cost, I found that there were ultimately two basic truths based on my time with Fruit Ninja Kinect: it’s a lot of fun to actually play and it’s among the more enjoyable games available for the Kinect. If you own Microsoft’s add-on of choice there’s no reason you shouldn’t grab this game when it hits the grocery… er… game store.