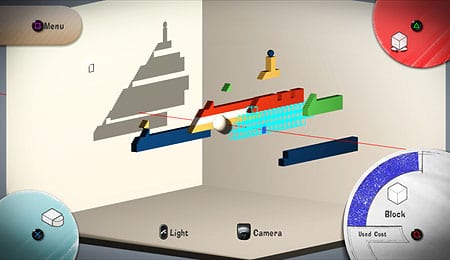 Echochrome 2 plays with light and shadow in the same way the previous game used perspective and angle.

The first Echochrome stood apart for so many reasons: its stark visuals of line-drawings against a white background, the soft classical soundtrack, and the mind-bending perspective-based play. By playing with perspectives, Echochrome actually wound up forcing you to literally think outside the box — and with user-generated levels, it could last indefinitely. How can you create a sequel to that?

Echochrome 2 keeps the concept of “get your guy from A to B” but ditches the perspective rotations for a different way of thinking: light and shadow. If you’ve seen screencaps from the game, you’ve probably wondered what the heck is going on. It’s a bit hard to explain on paper, but once you get it, it’s a rewarding puzzle experience that offers nearly unlimited opportunities.

The first thing that can be said about Echochrome 2 is that it’s the best game out there exclusively built for the Playstation Move. That doesn’t make it a killer app by any means, but it took a very simple concept and integrated it in a nearly-flawless manner. Echochrome 2 is all about light and shadow, and in the game, the Move represents a flashlight. Angle, tilt, or turn your Move and the virtual flashlight on the screen moves (no pun intended) accordingly. The figure on the screen only appears in shadows, so the way you manipulate the shadows on the back wall in the screen creates how he interacts.

That’s really all there is to the controls. Push the Move’s trigger button to activate flashlight movement, get it to the spot that you want, then let go of the trigger and let your guy do the walking. It’s simple but it doesn’t feel gimmicky (unlike some of the other Move launch titles), perhaps because everything about the game is focused on subtlety.

Echochrome 2’s graphics could be replicated on pretty much any console dating back to the 16-bit era of the Sega Genesis and SNES. The playing field is littered with an isometric perspective of various blocks, holes, bridges, and stairs using simple primary colours. With your Move flashlight projecting on to the wall behind these blocks, the shadows look, not surprisingly, like shadows. So there’s not a lot of intensive graphics here, though the animation is smooth and clean. More importantly, it stays with the minimalist aesthetic of the first game. Echochrome 2 isn’t trying to be Killzone 3; it does what it does and it does it well.

The game’s soundtrack is very similar to its precursor — subtle string music that could be found at a doctor’s office or day spa promote a calm, thinking-man’s environment for gameplay. For the sequel, Sony has added a woman’s voiceover to the basic dialog messages that appear on screen. She seems a bit to chipper for it all, but she gets the job done without being intrusive.

How to explain Echochrome 2’s gameplay? As with the first game, it’s all about shifting perspectives to get a walking figure to the exit. By shining the Move flashlight against blocks, you create shadows on a wall; the figure traverses the shadows as if they were solid platforms. Depending on the formation of the shadows, you can create a path, combine stairs, build a gap, or use the game’s sinkhole and trampoline symbols to manipulate your figure.

The figure also reacts in real-time to the shadows around him. For instance, if he’s standing on a platform and you rotate the shadows so that a block rises up beneath his feet, he’ll go with it. With the sinkhole (a hole that drops him straight down to whatever platform is beneath him) and the trampoline (a circle that launches him skyward), he can also react in real-time. So if you manipulate the shadow of a trampoline to pop up beneath him, he’ll react accordingly.

It sounds simple, and the concept really is. The beauty of the game is when you experience the a-ha moment for each level. There’s a sense of accomplishment akin to beating a boss in Metal Gear Solid or completing a quest in Fallout, yet the mechanism to get that feeling is completely different. Echochrome 2 comes in three modes: the aforementioned get-the-guy-to-the-exit mode, an Echo mode where your goal is to have your figure meet up with various other figures (Echos) on the level map, and a Paint mode, where you navigate different-coloured figures to match up with the blocks on the screen. All use the same mechanism for shadow manipulation, so once you get going, you’ll find the other modes are extensions of the core game despite the different goals.

It’s also very important to note that Echochrome 2 has user-generated levels. This means that you’ll stay busy solving puzzles for a long, long time, and each level has other bonuses (such as manipulating the light to create shadow objects) that provide a reason to re-visit previously completed levels.

Puzzle games aren’t for everyone, but Echochrome 2 should have no problem winning over all but the most stubborn few. Like any good puzzle game, it gets better the more you play it, and the simplicity of the control scheme, coupled with the seemingly limitless amount of levels to play, make it a fantastic purchase for its budget price. Yes, you won’t spend six-hour marathon sessions with it like you might with, say, a Mass Effect game, but Echochrome 2 is in a world all its own and stands far apart from other “casual” puzzle games. It’s the closest thing to a must-purchase game for anyone with a Playstation Move.