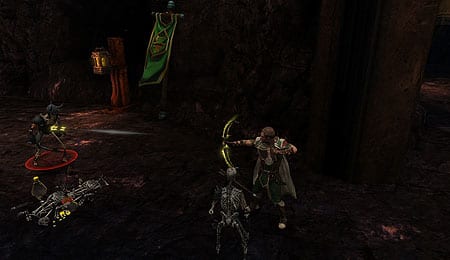 Magical weapons create some of the game’s cooler effects.

Although I’ve never played the traditional, dice-based Dungeons & Dragons game, I invested my fair share of gaming hours into turn-based PC titles like Pools of Radiance, Curse of the Azure Bonds and Secret of the Silver Blades. Given the wealth of potential source material and my undeniable passion for hack n’ slash titles, I had high hopes for Atari’s Daggerdale. Were they misplaced?

It shouldn’t take anyone long to acclimate to the basic functions of Daggerdale. Each of the face buttons controls an attack or action, while holding down the left trigger opens up a second group for a maximum of seven pre-mapped commands (“Y” is reserved for interacting with objects). Up and down on the d-pad allow you to switch between two camera views, one close up and the other from distance.

One annoying omission is the inability to cycle through enemies as you auto-aim on the closest foe in your field of vision. There are also a few weird bugs that affect the controls, most notably a glitch that causes you to freeze until you use your class power (right bumper) and another that makes the ammo from your ranged weapon vanish, causing it to do no damage.

With the entirety of Daggerdale taking place in a subterranean setting, there isn’t a lot of variety in the relatively small areas you’ll be exploring, and the majority of the game is spent traversing hallways or winding paths with very few open spaces. There’s some decent detail work here and there, but there’s nothing particularly noteworthy about the environments. Character models, both in game and during cut scenes, are also very plain and recycle frequently throughout.

There are some issues with texture pop-in and loading as well as a handful of graphical bugs such as enemies that will simply freeze in place, allowing you to kill them without protest. A similar issue has slain foes becoming locked in a statuesque form, which is a purely visual issue.

As vanilla as the visuals may be, Daggerdale’s audio fares no better. Playing through the game is an incredibly quiet affair with the minimal score often barely audible in the background, leaving just the sounds of combat to keep you company. What little voice acting exists is passable, but the decision to have characters emit periodic grunts and mumbles during text sequences was a poor one as it just makes what is supposed to be meaningful dialogue seem silly.

Much like the presentation, the plot is pretty forgettable. You select from one of four available heroes — a human fighter (melee), Dwarven cleric (healing), Halfling wizard (magic) or Elven rogue (ranged) — and proceed to battle all sorts of nasty creatures in an effort to rid Daggerdale of the evil wizard Razlus, who is bent on destruction in the name of Bane.

Available quests are broken into primary and optional with the latter being almost exclusively made up of clearing a nearby area of that level’s resident bad guys. As successfully completing these optional tasks usually results in only a pittance of experience points and gold, there isn’t really a compelling reason to accept them other than racking up kills. It seems odd that in a game driven so much by the desire to empower your character and find new and better loot that only once do I recall receiving an item for completing a side quest.

The main quests generally follow the same basic layout. Go here and either: (a) find an item; or (b) clear out an area, and then return to the quest giver. There are times when one objective will branch off of another, but it’s rarely compelling. You’ll also have to battle a map that only shows a portion of the area and cannot be moved, leaving you to guess where you’re going at times. In addition, though you may save character progression at any point, it’s impossible to save quest progress so if you die or fail a portion you’ll be forced to start over from scratch.

What is enjoyable, however, is Daggerdale’s core gameplay concept of leveling up your hero so that he (or she) can annihilate hordes of enemies. There’s something undeniably gratifying about returning to a room you struggled with earlier only to make short work of your enemies. Yes, they scale so that you’re not fighting creatures a half-dozen levels below you, but your own progression through improved base stats, new abilities and better equipment makes it an unfair fight — even with the game capping your advancement at Level 10.

Co-operative play, which was such a hot button issue when Torchlight launched a couple months back without it, is present here, and conceptually it’s pretty cool. The strengths and weaknesses of the four available classes match up well together, and it’s fun to team up with people online for some good old fashioned goblin killing.

Unfortunately, online co-op is rife with issues that permeate the experience from the moment you decide to play. The “lobby” shows only number of players and not key info like character level and game progress. Once you’re in a game certain items only show up for the host, including critical things such as objective markers that tell you where to go next.

Buried beneath a number of bugs and assorted annoyances is a fairly fun hack n’ slash experience. If the inevitable patch can solve most of these issues then fans of the genre could do far worse than to pick up a copy of Dungeons and Dragons: Daggerdale — at least once it hits “Deal of the Week” status.