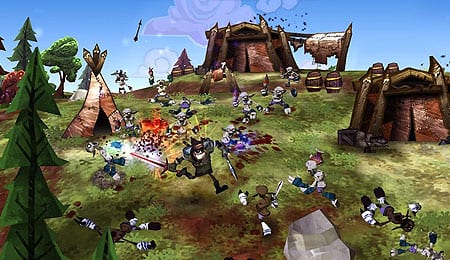 Filthy Greems are no match for the mighty DeathSpank!

It’s been roughly six weeks since DeathSpank, the brainchild of acclaimed game designer Ron Gilbert, was released on both Xbox Live Arcade and PlayStation Network. However, due to a steady barrage of new titles I was unable to play through this action RPG…until now. Cue heroic music!

As DeathSpank you’ll be asked to dispense copious amounts of justice against a cavalcade of unique, and often humorous, enemies. You’re able to equip and attack with four weapons at a time — each one is assigned to a face button — as well as block with the right trigger. The biggest challenge is learning how to time your blocks to ward off blows. Even then, there are instances where you’ll simply be overrun by sheer numbers, which had me pining for the option to evade. It’s a pretty forgiving game, though, so the frustration level is mild.

The mapping of your foods and potions to the d-pad is a good idea in theory, but the Xbox 360’s d-pad is so imprecise that you’ll sometimes find yourself using the wrong item. It was enough of an issue that I rarely equipped my most valuable potions unless I knew in advance that I was going to be using them.

The word that springs to mind when trying to describe the visuals in DeathSpank is charming. The blending of fully 3D characters with 2D backgrounds works masterfully, and the diverse locations really make you want to investigate every nook and cranny in the world so that nothing is left unseen. It’s colourful and lively, and is a perfect counterpart to the tongue-in-cheek story. Add to the gorgeous environments an entertaining cast of characters, both friend and foe alike, and this becomes a real stand out effort graphically.

While I’d stop short of calling the music a weak link, it can be repetitive despite generally doing a good job of complementing the graphics. Where the audio excels is in the voice acting. There’s a surprising amount of dialogue in the game, and the lines are consistently well delivered to really drive home the game’s humuor. In particular Michael Dobson deserves serious kudos for his hilarious work as DeathSpank — the voice…the timing…it’s just perfect.

Beneath the quirky visuals and humorous writing, DeathSpank doesn’t stray from the tried and true RPG formula of grinding for experience through combat and side quests. As you level up you’ll gain access to more powerful weapons, armour and potions, which in turn allows you to defeat higher level enemies and move the story along. Some of the side quests can be a bit tedious and repetitive, but I rarely found myself getting bored along the way.

The story itself is downright silly. You are DeathSpank, hero of the downtrodden, and you’re seeking an object known simply as “The Artifact.” To acquire this item you’ll need to enlist the help of others, who in turn will be asking you to help them by performing various tasks. The premise is nothing new, but the laughable way it unfolds makes you want to keep pressing forward to hear the next absurd conversation or embark on an equally ridiculous expedition. All told you can expect to spend in the realm of 8-to-10 hours vanquishing evil.

Combat is of the basic hack ‘n slash variety, and if there’s an area of the game that could’ve benefited from more variety this would’ve been it. You essentially mash your attack buttons until everything around you is dead. When tackling tougher enemies the game’s limitations become apparent as you’ll generally just hold down block and try to sneak in a hit or two before blocking some more. A perfectly timed block with instantly fill your “Justice meter,” allowing you to unleash a powerful attack that strikes multiple enemies, but when upwards of a half-dozen foes are attacking it’s tough to do.

Thankfully, being defeated in battle comes with limited consequences. You’ll drop some coin and be transported back to the nearest outhouse (they serve as the game’s fast-travel system) with partial health. Munch some food or chug a potion and then go pick up your money and you’ll be right as rain once again. There are no experience penalties or anything like that.

DeathSpank also excels at dangling carrots in front of your face in the form of ever improving items to collect. Enemy loot drops, quest rewards and treasure chests allow you to amass a diverse repertoire of weapons and armour by the time the credits roll. Plus, in keeping with the game’s humour, there’s a ton of funny items to collect such as the chicken cannon (it launches chickens), poop hammer (it knocks the crap out of your enemy) and orphan whistle (summons an orphan to fight by your side). My lone complaint is that the item management system feels a little dated.

There is also an option to play two-player co-op with a buddy taking on the role of Sparkles, a wizard that has a basic selection of spells. It’s not a fully fleshed out co-op experience as the second player shares a health bar with DeathSpank and cannot be upgraded in any way. It can be fun to play in short bursts, but it lacks any tangible depth.

Playing through DeathSpank is a lot of fun as its over-the-top sense of humour and engaging graphics more than make up for its modest shortcomings. It’s well worth 1,200 MS Points (US$14.99) even without a lot of replay value.