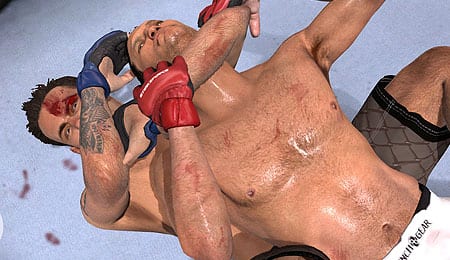 Sinking in a choke hold leads to an intense mini game as you try to submit your opponent.

Alright, stop me if you’ve heard this one. UFC President Dana White walks into Electronic Arts and pitches a mixed martial arts video game only to have EA shoot him down under the reasoning that it isn’t a sport. Accurate or not, White has gone on the offensive, pledging not to sign any fighter that appeared in the recently released EA Sports MMA. However, while EA may lack the star power of THQ’s offering, its first foray into the sport isn’t about to tap out.

Electronic Arts takes some chances with its default layout, assigning strikes to the right analog stick (a la Fight Night) while the other aspects of mixed martial arts — clinching, takedowns, ground work and submissions — are handed with single button pushes. It sounds simple on paper, but in reality it’s quite complex. In fact, you may struggle early on before learning the grapple system is equal parts timing, managing stamina and deception (at least in multiplayer). Mash buttons wildly and you’ll be exhausted, opening you up to being knocked out or submitted.

I wasn’t sold initially, but after logging more than 100 fights, I’m really impressed with the job EA did making the controls simple while keeping the action complex. Who knew you could maintain that cat and mouse chess match feeling with simple one-button commands? For those that prefer THQ’s setup, there is an UFC Unleashed-inspired option as well.

Built off a modified version of the technology behind Fight Night 4, EA Sports MMA looks great as muscles flex, blood flies and eyes swell shut. Pepper your opponent’s ribs with enough blows and the skin will redden. Pound their face and watch blood splatter onto the mat and you. Fighters move and struggle beautifully despite the repetitious nature of some animations, particularly the striking where the reactions to punches and kicks look spot on.

Commentary is handled by Mauro Ranallo and Frank Shamrock, and it alternates between insightful and repetitive. When you’re matching two licensed fighters (like cover athletes Randy Couture and Fedor Emelianenko), the banter is crisp and focused. On the other hand, when you’re slogging through the career mode with a created fighter, you’ll hear a lot of the same lines with some variation for things like milestones, championship fights and rematches. I also ran into commentary loading too late so Shamrock is screaming about needing to get the submission while I’m watching a replay of it.

Sound effects are good for strikes, but largely non-existent for transitions or submission attempts, which is a little disappointing. It’d be nice to hear someone struggling for breath in a choke hold or straining to stop their opponent from passing. The soundtrack is rock and hip-hop centric.

The meat and potatoes of EA Sports MMA is its career mode, which allows you to guide your creation through a 40-fight career. You’ll start off as a fresh-faced hopeful in the gym of MMA legend Bas Rutten, who begins training you to become a fighter; by the way, the tutorial found within the career mode is roughly 1,000 times more helpful than the bizarre MMA 101 mode from the main menu.

After learning the basics, you’ll sign with your first organization and start your pro career. Before each fight you’ll need to train for eight weeks. There are several different drills to do, targeting your various skills such as moving/evading, arm submissions, boxing combos and much more. Rather than make you complete 320 drills over your career, though, you’re given the option to simulate the training without penalty. However, more advanced drills only unlock when you get an “A” on the previous level.

As you progress you’ll have the opportunity to visit other gyms around the world that specialize in various fighting disciplines. It’s here that you’ll find the higher level training sessions as well as the ability to unlock special moves like the Superman punch, spinning back fist and gogoplata. There are 28 moves available, and you’re allowed to learn 16 of them.

However, beyond shaping your fighter’s strengths and weaknesses, not a lot is left to your discretion in career mode. Rutten automatically selects all of your fights, which follows the basic pattern of winning a few bouts, earning a title and then moving on to a more prestigious league until you reach either Strikeforce or Mystic (a fictional Japanese promotion). Once you capture their belt there’s nothing left to do but defend it. You can’t move to another weight class. You can’t challenge anyone. You just play out your career and wait for the long-rumoured super fight to take place.

There are also a couple other minor annoyances worth noting. First, you’ll notice you’re earning money for each fight, but outside of using it to train there is nothing to be done with it. At the end of my career I had millions of dollars, and yet I couldn’t use it to buy new outfits, better equipment or anything. Second, your career almost feels like it is taking place in a vacuum with nothing outside of a blog to track your popularity. It would’ve nice to see press conferences, interviews or sponsorship interest rising to coincide with your progression.

The bouts themselves are fun with the feeling that you’re never out of a fight when you’re in trouble, but never completely in control, either. I’ve suffered flash knockout losses and countered submissions for improbable wins, which helps keep you on your toes. Opponent A.I., however, did seem a bit precognitive when stopping my passes at times, so there are definitely moments of frustration.

Where EA Sports MMA faces a challenge is the lack of household names among its licensed fighters. Sure, most have heard of guys like Couture and Ken Shamrock, but there’s no denying nearly all of the sport’s biggest names reside in the UFC. The game gets around it the same way pro wrestling games have for years, by giving people the tools to recreate their favourite fighters — this includes allowing gamers to use created fighters online as well as sharing them via a feature on the main menu — but it’s not quite the same to hear a GSP clone called simply “Rush.”

As you might expect from a company with a pedigree like Electronic Arts, online multiplayer is very strong, though the absence of traditional lobbies makes finding a bout problematic at times. Yes, multiple gamers can get together and create an entire card where those that aren’t fighting are watching, but the results don’t count on your record nor do they afford you experience points, leaving “Quick Match” as your lone option for advancement.

Online performance was largely excellent during my forays with the only exceptions occurring in one of the online cards referenced above. My one-on-one quick matches consistently performed smoothly, something so vital in a game where one punch can change a fight, and they’re where the flexibility of the game’s fighting system really shines through. This is one area where EA Sports MMA has a substantial leg up on the competition.

EA Sports MMA is a tremendous opening salvo in what fans should hope is a long and bloody battle between Electronic Arts and THQ for your mixed martial arts dollar. The lack of the UFC license is a blow, but the smoothness and accessibility of the controls coupled with strong online play make this a great option for fight fans.