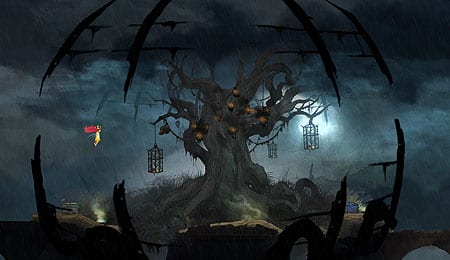 There’s plenty of darkness in Child of Light.

Even without knowing exactly what to expect from Ubisoft’s latest release, Child of Light, we found ourselves keeping a rather keen eye on it thanks to beautiful graphics and promising trailers. And the final product is better than we’d hoped.

Initially, we would’ve classified this as a platforming RPG. Traditional platforming mechanics are brushed aside early on, however, when your character is gifted with the ability to fly. This opens up the sizeable world and allows you to soar through the air in search of hidden goodies. It’s quite responsive, allowing you to weave through obstacles en route to your destination.

When not airborne, Child of Light incorporates the other half of the fight-or-flight response. The turn-based battles handle just fine, though controlling your firefly companion with the right stick always felt kind of dicey. A second player can actually join in and handle those duties, but it’s a pretty limited role so good luck getting any serious gamer friends to sign off on that.

It didn’t take long for us to fall in love with the world of Lemuria, which has been brought to life in gorgeous (and decidedly unique) fashion. Whether it’s the way the various characters are portrayed, the variety of enemies or the endearing combat animations, Child of Light just nails it. We’ve seen dozens if not hundreds of fantasy worlds brought to life in games over the years, and very few have done the job with as much artistic flare and style.

Almost equally impressive is the Child of Light’s stirring soundtrack. From start to finish it keeps pumping out excellent, emotional tunes that do more to make you invest in the game than countless other, larger budget titles have done with contrived “emotional” moments. Whether dramatic or whimsical or relaxing, the soundtrack succeeds unequivocally.

Transported at the very beginning from the real world (Austria circa 1895), Aurora is summoned to the mysterious realm of Lemuria in an effort to restore it to its former glory by reclaiming the “Stolen Lights” from The Black Queen. It’s a familiar formula imbued with a running gimmick: everything is told in rhymes. On the plus side, it furthers the fairy tale vibe the game is aiming for. On the downside, the actual rhymes aren’t particularly clever and often seem contrived or even groan inducing.

Despite a pedestrian story arc, Child of Light pieces together an engaging experience on the gameplay front thanks to the fun of flying around and exploring as Aurora, and the satisfaction of battling dark creatures. Starting with the former, the game stops holding your hand early on, allowing you to search out hidden pathways, collect treasure and move at your own pace. Paired with your trusty firefly Igniculus, you’ll be lighting darkened pathways and manipulating objects to your heart’s content.

As much fun as we had exploring, combat is the true star of the show. Using an Active Time Battle system that should be familiar to Final Fantasy veterans, Child of Light lays out a concept that appears very simple on the surface. Fights feature a timer across the bottom that tiny icons of everyone involved in the battle (friend and foe alike) move along. When they reach a designated spot on the timer they choose an action — the game will pause when it’s your turn.

While that may sound pretty basic, considerable depth is added by splitting the timer into two sections. When in the first section, the characters don’t do anything at all. Upon reaching the second part, however, it’s time to select an action (such as strike, defend, cast a spell, etc.). Each action has a “casting time” that determines how quickly you cover the secondary portion of the timer. Powerful spells, for example, take much longer to unleash than a basic blow.

The wrinkle here is that if you’re struck after entering your command but before executing it, your action is interrupted, causing you to miss your turn and sending you back along the timer. This works both ways, and the result is that planning becomes an important part of battles as smart strategies can help you dispatch enemies via a series of short-circuited attacks. Igniculus follows you into battle as well, grabbing orbs, healing party members and even allowing you to slow enemy progress by blinding them. It’s very well thought out.

Our only gripes here are that a lot of battles eventually become formulaic as you’ll find yourself using the same tactics to defeat the same enemies (to be fair, it’s a common failing in many RPGs). You’re also limited to a two-person party, and even though you can switch freely between party members without penalty it does eventually get a little tedious to keep doing it.

Leveling is standard fare as each time you gain a level you earn a skill point to allocate to a sizeable selection of upgrades and buffs. There’s also a basic system for improving your equipment where collected gems known as Oraculi can be assigned to one of three areas for your party members. Each one offers different enhancements (more hit points, elemental damage/defense, etc.), and they can be combined to create more potent versions.

There are a few cracks in the armour with Child of Light, but its shortcomings pale in comparison to the number of things it does so well. Between its wonderful presentation, considerable length (figure north of 15 hours) and eminently reasonable price (US$14.99) this is a game no self-respecting RPG fan should be without.

Now it’s your turn. Let us know in the comments below your impressions of this game.